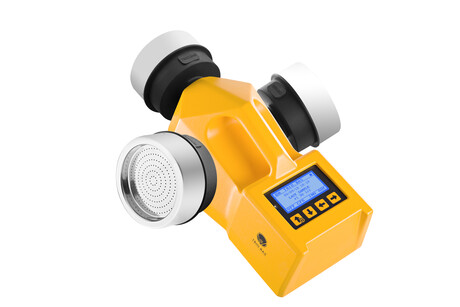 Microorganisms that can cause infections in healthcare facilities and product spoilage in both a pharmaceutical and food setting include bacteria, fungi, and viruses. Typically the source of these microorganisms can include environmental sources, and for this reason, environmental monitoring protocols should include strategies to reduce the incidence of these organisms.

Through air sampling, it is possible to evaluate the level of microbial contamination in the environment. Active monitoring and passive monitoring techniques are available.

In active air monitoring an impactor style microbial air sampler, such as the Orum TRIO.BAS device, is placed into the environment under test and draws in a known volume of air over a petri dish that is contained within the device. Different culture media can be used depending on the types of microorganisms being investigated. The quantity of microorganism present is measured in colony forming units (CFU) per m3 of air.

Examples of passive monitoring include ‘settle plates’ which are standard petri dishes containing culture media that are exposed to air for a given period. Organisms which ‘fall’ on the surface of the agar plate can be counted to determine in level of bacteria in air. Only larger particles (greater than 10 μm) are likely to land on plates. Results are expressed in CFU/plate/time or in CFU/m2 /h. Settle plates are not likely to be validated as a recovery method as there is no accurate measurement of the volume of air sampled.

The impactor style air sampler dates to the 1860s, when researchers used these devices to study the relationship between dust and disease. Today’s devices use the same general principle — a jet of particle laden air impacting on a plate.

The original devices were bulky and industries’ requirement for portable devices saw an influx of new models in the 1980s. The first of these new generation devices had a single sampling head, with the Orum TRIO.BAS MONO being a modern interpretation of the original devices. The device allows the addition of a single agar plate within the unit.

Recent advances have seen Orum introduce models containing two (TRIO.BAS DUO) and three (TRIO.BAS TRIO) sampling heads, allowing for more complex sampling plans with less user intervention. The benefit of a two-sampling head unit is that two different culture media can be utilised simultaneously: for example, Tryptone Soya Agar for total aerobic bacterial count and Sabouraud Dextrose Agar for counting yeasts and moulds. In addition, as the multi-head units allow for less user intervention, multiple plates can be tested simultaneously with a reduced risk of microbial contamination coming from the operator during setup rather than the test environment.

To illustrate the benefit of a three sampling head unit, Roberto Ligugnana from Orum presented a poster at the 14th Annual PDA Global Conference on Pharmaceutical Microbiology showing that, when comparing a single-head unit that needed to be accessed three times during its run to a three-head unit that was accessed only at the start of the run, and programmed such that each head ran at a different time, the CFU counts on the single head unit were higher, suggesting that the operator, and not the environment, was actually contributing to the total CFU counts. This artificially elevated count could result in a product failing QC when in fact the environment was within acceptable limits.

The Microbial Monitoring of Compressed Gas

The microbial monitoring of compressed gas used in cleanrooms is an important requirement of the pharmaceutical production facility. The high-pressure gases that are in contact with pharmaceutical products during production and application include air, argon, carbon dioxide and nitrogen. They are stored in special containers or tanks and delivered in high-pressure cylinders or cryogenic vessels. Although the presence of active microorganisms in compressed gas is unusual due to the harsh environment, nutrients such as water and oil droplets are available to allow for the growth of biofilms. Orum supplies attachments for impact air samplers that allow for the testing of compressed gases. The air flow from the compressed supply is regulated through a flow valve before entering the aspiration head of air sampler.

Go beyond western blot images and use the versatile Amersham ImageQuant 800 CCD imagers to...

If you regularly use a large number of humidity probes, relative humidity transmitters or...