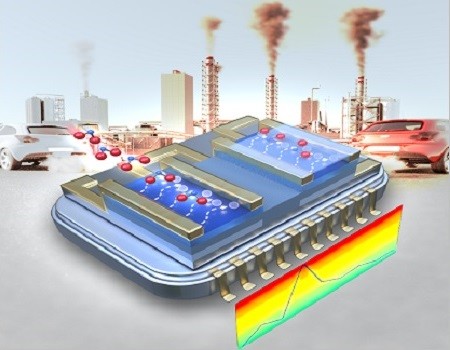 Researchers from the King Abdullah University of Science and Technology (KAUST) have developed a small, low-cost device that senses nitrogen dioxide (NO2); one that could be deployed in potential hotspots around cities, alerting authorities if levels of the harmful gas start to spike. The research was led by Khaled Salama and has been published in the journal ACS Sensors.

Most existing NO2 detectors are large, complex machines suited to laboratory use, whereas the compact new device is designed to form part of a distributed network of air quality sensors. As noted by Mani Vijjapu, a PhD student in Salama’s lab, “Our sensor exhibits very high sensitivity and selectivity for NO2, operates at room temperature and has very low power consumption.”

The biggest advantage over previous designs is that the gas detector brings together all the necessary sensing and signal processing components within a simple, fully integrated system, Vijjapu said. Despite its simplicity, the device’s output signal varies according to NO2 concentration.

The gas detector’s high performance, low power consumption and fully integrated design all stem from the NO2-sensing thin-film transistor at the core of the device. Previous sensors have used metal oxides that are sensitive to NO2 only when heated or continuously irradiated with light. This time, the team used a semiconductor called indium gallium zinc oxide (IGZO), which has multifaceted benefits for a gas sensor.

NO2 molecules (red and blue spheres) in the air are drawn to the electrons (black spheres) on the sensor’s surface, triggering a detection event (left). The sensor is revived with light (right), which generates charged particles that neutralise and release the adsorbed NO2. Image ©2020 Vijjapu et al.

The IGZO thin-film transistor acts as an electronic component of the device and also as the NO2-sensing layer. The strongly electron-accepting NO2 molecule is drawn to the electrons on the transistor’s surface. The more NO2 molecules that adhere to the IGZO, the more electrons are depleted from its surface, altering its electronic output and triggering an NO2 detection alert.

After a detection event, the sensor is reset by reviving the IGZO layer with the light from an integrated blue LED. Similar to a solar cell, the light generates negatively charged electrons and positively charged holes in the IGZO, which neutralises the adsorbed NO2 and releases it from the surface.

This is believed to be the first study to achieve sensing and revival of a semiconducting metal oxide-based thin-film transistor sensor at room temperature. The next step, said Salama, is to translate the research into a prototype and maybe even a product by working with industry.

“We are also interested in exploring other materials to detect other hazardous gases in the environment,” he said.

Top image: Nitrogen dioxide molecules from vehicle emissions or industry can be detected by the integrated sensor before they reach dangerous concentrations. Image ©2020 KAUST.