Cobalt-graphene could be a viable replacement for platinum catalysts

There’s a new contender in the race to find an inexpensive alternative to platinum catalysts for use in hydrogen fuel cells.

Brown University chemist Shouheng Sun and his students have developed a graphene sheet covered by cobalt and cobalt-oxide nanoparticles that can catalyse the oxygen reduction reaction nearly as well as platinum does and is substantially more durable. 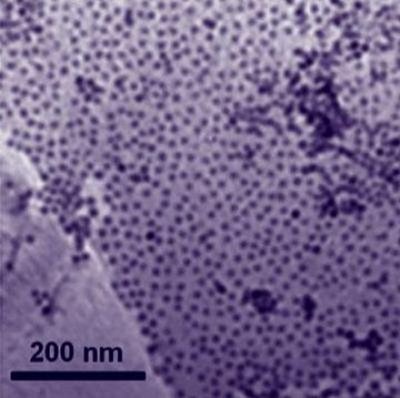 Nanoparticles of cobalt attach themselves to a graphene substrate in a single layer. As a catalyst, the cobalt-graphene combination was a little slower getting the oxygen reduction reaction going, but it reduced oxygen faster and lasted longer than platinum-based catalysts. Image credit: Sun Lab/Brown University.

The new material “has the best reduction performance of any non-platinum catalyst”, said Shaojun Guo, postdoctoral researcher in Sun’s lab and lead author of a paper published online in the journal Angewandte Chemie International Edition.

The oxygen reduction reaction occurs on the cathode side of a hydrogen fuel cell. Oxygen functions as an electron sink, stripping electrons from hydrogen fuel at the anode and creating the electrical pull that keeps the current running through electrical devices powered by the cell. “The reaction requires a catalyst, and platinum is currently the best one,” said Sun. “But it’s very expensive and has a very limited supply, and that’s why you don’t see a lot of fuel cell use aside from a few special purposes.”

Thus far scientists have been unable to develop a viable alternative. A few researchers, including Sun and Guo, have developed new catalysts that reduce the amount of platinum required, but an effective catalyst that uses no platinum at all remains elusive.

This new graphene-cobalt material is the most promising candidate yet, the researchers say. It is the first catalyst not made from a precious metal that comes close to matching platinum’s properties.

Scientists have developed a formulation to increase the effectiveness of face mask filters at...

An antiviral surface coating technology, developed for use on surfaces and face masks, could...