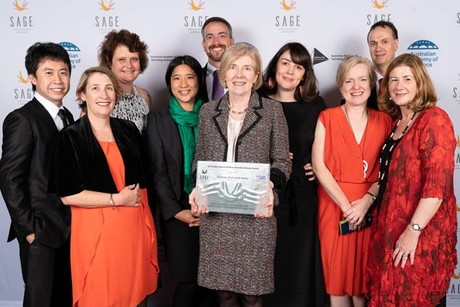 The awardees, listed in alphabetical order, are:

Around 50% of Australia’s higher education and research (HER) sector institutions participated in the SAGE Pilot. Benefits of the initiative include: increased career satisfaction and opportunities; improved working practices to support career progression; increased visibility of women in science; and an increased proportion of women in STEMM — science, technology, engineering, maths and medicine — departments nationally.

SAGE Executive Director Dr Wafa El-Adhami said that since SAGE began, the STEMM HER sector in Australia has stepped up significantly to address gender equity and diversity.

“The sector wants to make a difference and is now committed to and invested in Athena SWAN.

“Every institution on the SAGE journey that is implementing the Athena SWAN framework has chosen to make a positive difference to its workplace and culture for its staff.

“The commitment to transparency, to take action and to be held accountable is the true sign of leadership and a pledge to improve gender equity and diversity,” Dr El-Adhami said.

Elizabeth Broderick AO FTSE, lawyer, Sex Discrimination Commissioner in Australia (2007–15), Special Adviser to SAGE and Chair of the Expert Advisory Group (March 2016 to August 2018), said that the enthusiasm with which the sector has embraced the SAGE Pilot has been exciting to see.

“To those who may not be receiving an award but who are continuing to drive impact, thank you. It’s your participation in the process and the lessons learnt along the way that provide some of the most powerful parts of the SAGE journey,” Broderick said.