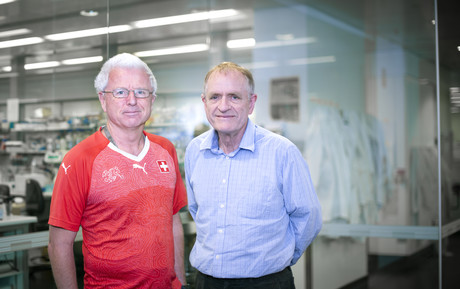 Professor Andreas Strasser and Professor David Vaux, both of Melbourne’s Walter and Eliza Hall Institute of Medical Research (WEHI), have been awarded the CSL Florey Medal, presented biennially by the Australian Institute of Policy and Science (AIPS) for significant achievements in biomedical science and/or human health advancement.

Together, the two scientists provided the first insights into the molecular mechanisms for cell death, and the first evidence that the failure of cells to undergo programmed death can lead to cancer and autoimmune disease. Avoidance of cell death is now recognised as one of the universally accepted ‘hallmarks of cancer’.

The scientists’ work together began in the late 1980s to early 1990s, when they showed that a protein called Bcl-2 regulates a process known as apoptosis, or programmed cell death — the body’s primary method of ensuring that old and damaged cells do not outstay their welcome and cause disease.

Due to genetic mutations, some leukaemia and lymphoma cells produce too much Bcl-2. It was initially assumed that this caused the malignant cells to proliferate, but Prof Strasser and Prof Vaux show that rather than stimulating cell division, Bcl-2 stopped cancer cells from being able to die by apoptosis. The clear implication of their findings was that drugs designed to kickstart the cell death process could be used to treat diseases, in particular, cancer.

Their work was the foundation for development of the drug Venetoclax by researchers at WEHI, in association with US pharmaceutical companies Genentech and AbbVie. The drug is now in widespread use combating chronic lymphocytic leukaemia — the most common form of leukaemia diagnosed in Australia — and related drugs are in clinical trials for several other cancers.

Today Prof Vaux is Deputy Director, Science Integrity and Ethics at WEHI and Prof Strasser is the head of the institute’s Blood Cells and Blood Cancer division. They said they were honoured to be the joint recipients of the Florey Medal.

“I’m proud to share this honour with Andreas,” Prof Vaux said. “Bcl-2 was the spark that ignited a whole new field that has given new insights not only into the origins of cancer, but also, as first shown by Andreas, autoimmune disease. But cell death research has only just begun.”

Prof Strasser agreed, saying, “Although our research into cell death and cancer has been underway for decades, it remains for me a vital and exciting field. There still remains much to be discovered and there is a real opportunity to translate the understanding or programmed cell death into improved therapies for diverse cancers.”

“Andreas and David’s discoveries are the basis for thousands of journal papers every year and have had a significant impact on the field of oncology research,” he said. “Their work further enhances Australia’s reputation for producing world-class research. We congratulate them on their achievements.”