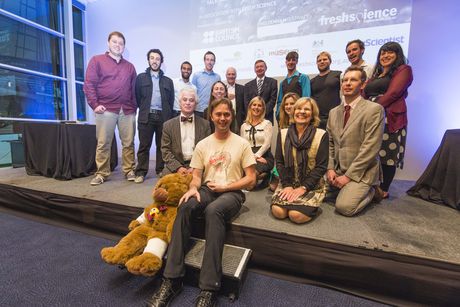 Could you explain years of your research in just 3 minutes?

That’s what 12 scientists from around Australia will have to do when they take to the stage on 13 May to reveal the latest in Australian science at the FameLab 2015 national finals competition in WA.

The finalists are some of Australia’s top early-career scientists and must quickly engage an audience of luminaries from the science, business, arts and media communities while adhering to the competition’s cardinal rules - no jargon, lab coats or slideshow presentations.

Attendees can expect to hear speakers on a diversity of topics including ‘Aliens in Disguise’, ‘Spiders in Cities’ and ‘A Laser-guided solution to the Squishy-Brain Problem’.

The night will be hosted by respected science journalist Robyn Williams AM, who hosts the ABC’s The Science Show on national radio. A panel of judges will include Helen O’Neil from British Council Australia, Gillian O’Shaughnessy from ABC Perth and Professor Ryan Lister (UWA), who was the 2014 Life Scientist of the Year.

The event will be held at the Western Australian Maritime Museum.

FameLab is the British Council’s International Science communication competition. The winner will represent Australia at the UK Cheltenham Science Festival in June.

The first episode of the video series is now live and focuses on palladium catalysed...

The 58th AACB Annual Scientific Conference will be held at Brisbane's Royal International...