In vitro diagnostics market to reach US$69 billion in 2024: GlobalData 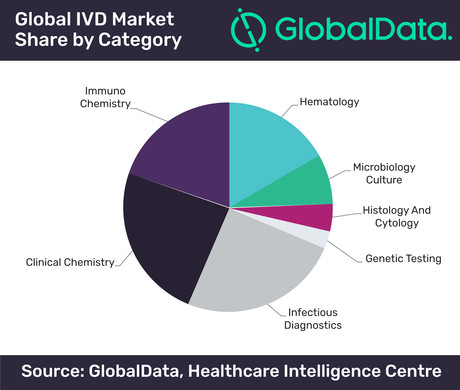 The overall market value of in vitro diagnostics (IVD) stands at US$52 billion this year and is projected to grow at a compound annual growth rate (CAGR) of 4.2% to US$69 billion in 2024, according to analytics company GlobalData.

The IVD market covers almost all indications and is a vital component of health care. As a result, it comprises several mature sectors that are now being driven primarily by the increasing population base. However, it is also being disrupted by new technologies such as point-of-care testing and genetic testing.

“In recent years there has been a continuing trend towards lab consolidation, with hospitals forming networks to perform tests with high throughput and lower overhead costs,” said Nadia McLurcan, healthcare analyst at GlobalData. “This trend is expected to continue in the future, requiring labs to look for scalability in their analysers.

“Companies are adapting to this trend by offering modular systems, as seen in Roche’s Cobas series, Abbott’s Alinity analysers and Siemens’ Atellica Solution, among others.”

The company also found that point-of-care technology has improved in recent years. There has been a shift in physicians’ attitudes towards viewing point-of-care tests as a reliable alternative to laboratory testing, whereas previously there was significant concern about the quality of these tests.

“There is still significant resistance that arises from the nature of point-of-care testing itself,” McLurcan said. “It is a fundamentally disruptive technology, which requires a reorganisation of the healthcare setting in order to be implemented.

“To overcome this, companies need to focus on finding champions within organisations who are willing to push for point-of-care technologies, far more so than with other tests.”