Models made for science at University of Sydney exhibition

An exhibition at the University of Sydney’s Macleay Museum provides a rare opportunity to see models used to teach science and medicine at the university from the 1880s.

‘True to Form’ brings together the best of the University of Sydney’s collection of scientific teaching models. With strange shapes and forms, the models were made to be scientifically accurate but are also beautiful, revealing high-level artisanship.

The exhibition includes models representing embryos of marine larvae and the development of a frog, a large-scale human ear, a sheep, an oversize grain of wheat, extinct animals and crystals. 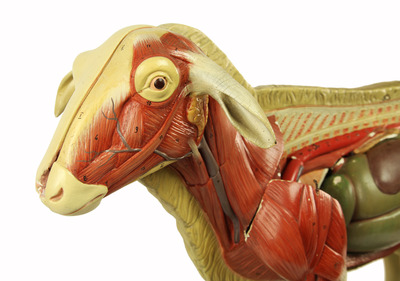 Crafted from wax, papier-mache, plaster and wood, the models were key teaching aids, alongside study specimens and blackboard charts, adding a visual dimension to what was hitherto a text-focused learning process.

“Students could study models to see the detail of internal structures and the relationship of organs before they practised dissection,” said True to Form curator Jan Brazier. “They could recognise what they were looking at down a microscope.”

The models in True to Form were used to teach anatomy, zoology, botany and geology. A horse’s head and heart were a staple part of teaching at the Veterinary School in the early 20th century, when horses were the basis of veterinary training.

At the medical school, a male anatomical model dubbed ‘William’ was a lifelike introduction to human anatomy. This rare papier-mache model was made in 1861 by the famous Auzoux factory in France. A clastic model, it is able to be taken apart to demonstrate the relationship between organs.

The market for models is also examined in True to Form. Often from German-speaking countries, model makers worked closely with scientists to give their products veracity and authority.

“The Zieglers were the leading makers of wax embryological models sold worldwide from the 1860s,” said Brazier. “Modelling everything from beetles to humans, their models helped students understand embryology and evolution.”

Computerisation has largely consigned the objects in True to Form to history, but they continue to tell us a lot about the evolution of scientific teaching and retain an aesthetic impact that demands attention.

What: True to Form: models made for science

Where: Macleay Museum, Gosper Lane, off Science Road, The University of Sydney