What's the link between snoring and heart disease? 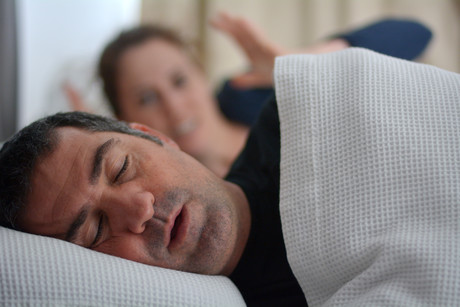 A brain chemical could be responsible for triggering heart disease and high blood pressure in people with the snoring condition obstructive sleep apnoea (OSA), scientists have discovered.

One in 10 middle-aged Australians have OSA — a snoring disorder that disrupts breathing, limits blood oxygen levels and interferes with sound sleep. People with OSA have significantly higher than average rates of stroke, heart disease, high blood pressure, diabetes and depression, and are more likely to feel excessively tired during the day.

The gold-standard treatment option for OSA is continuous positive airway pressure (CPAP), in which air is gently pumped into the airway overnight to stop the collapse. However, non-compliance is an issue and cardiovascular problems are often not corrected.

Australian researchers, led by Dr Melissa Farnham and her team at the Heart Research Institute, set out to investigate what role the brain plays in causing hypertension in people with OSA. The results of their work were published in the journal Frontiers in Neuroscience.

“We looked closely at the actions of a neurotransmitter called PACAP, or pituitary adenylate cyclase activating polypeptide,” Dr Farnham said. “Our results show that during acute intermittent hypoxia, a feature of OSA, PACAP signalling in the spinal cord helps drive persistent increases in sympathetic nerve activity.

“We think this mechanism is a precursor to the development of hypertension in conditions of chronic intermittent hypoxia, such as OSA.”

The team was impressed with how completely they could block PACAP’s response, totally abolishing nerve activity. The totality of the response bodes well for the effectiveness of future drug treatments, Dr Farnham said — the study thus paves the way for exciting new therapies that stop those with OSA developing dangerous and debilitating cardiovascular problems.

“We found that by blocking a particular PACAP receptor we could completely abolish the response in multiple experimental models,” she said. “A drug that is able to block this action in humans would spare thousands from heart-related problems.”