Renewable biofuel could be used on ships 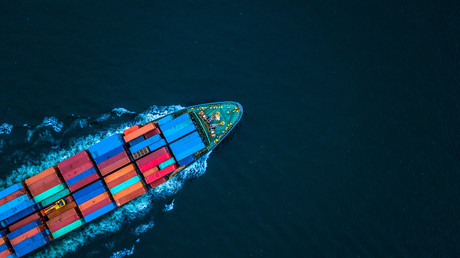 The shipping industry is responsible for emitting around 1 billion tonnes of carbon dioxide worldwide each year. Seeking to mitigate this problem, researchers at the Fraunhofer Institute for Environmental, Safety and Energy Technology UMSICHT have produced a climate-friendly, renewable biofuel that reduces greenhouse gas emissions by up to 30% compared to fossil fuel.

A team led by mechanical engineer Dr Andreas Menne, who heads up Fraunhofer UMSICHT’s Biorefinery and Biofuels department, has been converting bioethanol into products including synthetic diesel, gasoline and jet fuel that have nearly the same properties as fossil fuels. They are producing up to 20 L of biofuel a week in an experimental plant using bioethanol sourced from wheat straw, though Dr Menne noted that he could use any other alcohol.

The straw alcohol initially retains its liquid form as it flows from the metal drum through the pipes of the test plant into a vaporiser. When the temperature reaches 350°C at a pressure of 20 bar, the gaseous alcohol flows into the heart of the plant — a tubular reactor. This reactor is filled with pieces of activated carbon coated with a newly developed catalyst material. These catalysts cause the gas to condense by forming bonds between individual carbon compounds. This produces gasoline, kerosene or diesel, depending on how many carbon molecules are combined.

“A catalyst is often developed in the lab but may then turn out to be difficult to produce in large quantities. But we can buy the materials for this catalyst cheaply because it doesn’t consist of precious metals or rare earths. And most importantly, it remains stable over the long term,” Dr Menne said.

The biofuel packs plenty of power, as confirmed by researchers at the Fraunhofer Institute for Chemical Technology ICT. They put standard commercial engines on a test bench to run trials with the new fuel, rate engine power and measure waste gases with precision instruments. These readings were taken at different operating levels, during cold starts, under different loads and at varying engine speeds.

These trials found the biofuel’s energy density to be slightly higher than that of conventional fuels. That means a vehicle with this new fuel in its tank would have a slight advantage in a real race. The synthetic fuel also emits less carbon monoxide, carbon dioxide, hydrocarbons and soot than conventional fuels. Finally, the biofuel’s physical properties come close to those of fossil diesel, so it can be made to comply with prevailing standards.

Venkat Aryan, a chemical engineer at Fraunhofer UMSICHT, added up every molecule of the greenhouse gases in each process step to assess the ecological impact. He found that the CO2 equivalents for synthetic diesel made from wheat straw amounted to 64.3 to 91.6 g/MJ, depending on the ethanol source. That is up to 32% less than the 94 g for petroleum-based diesel.

Dr Menne noted that the fuel can be converted into gasoline, diesel or even kerosene for aeroplanes, though the latter is the most complicated application and marine diesel is a much simpler matter as it does not have to be processed in a refinery.

“You could simply set up our plant in a port,” Dr Menne noted. “Our process is so straightforward that shipping companies could produce their own diesel. Then the age of the big stinkers would soon be over.”