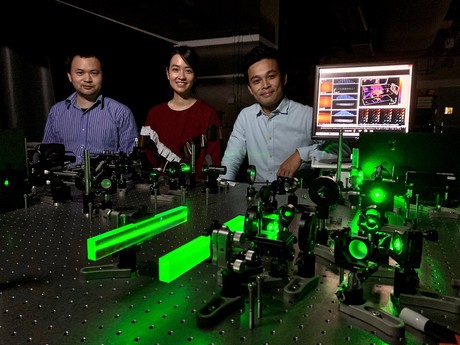 Hong Kong researchers have developed a new optical imaging technology that they believe will push the boundaries of living cells research.

Scientists have been using fluorescence microscopy to study the inner workings of biological cells and organisms for decades. However, many of these platforms are often too slow to follow the biological action in 3D, and too damaging to the living biological specimens with strong light illumination.

To address these challenges, researchers from The University of Hong Kong (HKU) developed coded light-sheet array microscopy (CLAM), which can perform 3D imaging at high speed and is said to be power efficient and gentle to preserve the living specimens during scanning at a level that is not achieved by existing technologies. Their breakthrough has been described in the journal Light: Science & Applications.

Existing 3D biological microscopy platforms are slow because the entire volume of the specimen has to be sequentially scanned and imaged point by point, line by line or plane by plane. In these platforms, a single 3D snapshot requires repeated illumination on the specimen. The specimens are often illuminated for thousands to million times more intense than the sunlight. It is likely to damage the specimen itself, and thus is not favourable for long-term biological imaging for diverse applications like anatomical science, developmental biology and neuroscience.

Moreover, these platforms often quickly exhaust the limited fluorescence ‘budget’ — a fundamental constraint that fluorescent light can only be generated upon illumination for a limited period before it permanently fades out in a process called ‘photo-bleaching’, which sets a limit to how many image acquisitions can be performed on a sample.

“Repeated illumination on the specimen not only accelerates photo-bleaching, but also generates excessive fluorescence light that does not eventually form the final image,” Dr Tsia noted. “Hence, the fluorescence budget is largely wasted in these imaging platforms.”

The heart of CLAM is transforming a single laser beam into a high-density array of ‘light-sheets’ with the use of a pair of parallel mirrors, to spread over a large area of the specimen as fluorescence excitation. As explained by postdoctoral researcher Dr Yuxuan Ren, “The image within the entire 3D volume is captured simultaneously (ie, parallelised), without the need to scan the specimen point by point or line by line or plane by plane as required by other techniques. Such 3D parallelisation in CLAM leads to a very gentle and efficient 3D fluorescence imaging without sacrificing sensitivity and speed.” 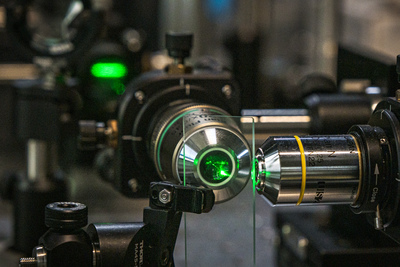 To preserve the image resolution and quality in CLAM, the team turned to code division multiplexing (CDM), an image encoding technique which is widely used in telecommunication for sending multiple signals simultaneously. Postdoctoral researcher Dr Queenie Lai, who developed the system, said, “This encoding technique allows us to use a 2D image sensor to capture and digitally reconstruct all image stacks in 3D simultaneously. CDM has never been used in 3D imaging before. We adopted the technology, which became a success.”

As a proof-of-concept demonstration, the team applied CLAM to capture 3D videos of fast microparticle flow in a microfluidic chip at a volume rate of over 10 volumes per second comparable to state-of-the-art technology. Dr Jianglai Wu, the postdoctoral research who initiated the work, noted, “CLAM has no fundamental limitation in imaging speed. The only constraint is from the speed of the detector employed in the system, ie, the camera for taking snapshots. As high-speed camera technology continually advances, CLAM can always challenge its limit to attain an even higher speed in scanning.”

The team has taken a step further to combine CLAM with HKU’s newly developed tissue clearing technology to perform 3D visualisation of mouse glomeruli and intestine blood vasculature in high frame-rate. Dr Tsia said, “We anticipate that this combined technique can be extended to large-scale 3D histopathological investigation of archival biological samples, like mapping the cellular organisation in brain for neuroscience research.

“Since CLAM imaging is significantly gentler than all other methods, it uniquely favours long term and continuous ‘surveillance’ of biological specimen in their living form. This could potentially impact our fundamental understanding in many aspects of cell biology, eg, to continuously track how an animal embryo develops into its adult form; to monitor in real-time how the cells/organisms get infected by bacteria or viruses; to see how the cancer cells are killed by drugs; and other challenging tasks unachievable by existing technologies today.”

CLAM can be adapted to many current microscope systems with minimal hardware or software modification. Taking advantage of this, the team is planning to further upgrade the current CLAM system for research in cell biology, and animal and plant developmental biology. An US patent application has also been filed for their innovation.

Meet the brewer that never brews the same beer twice

Passing the digital health baton with confidence and certainty

The state of safety and security in Australia's hospitals

Deakin University works with MSC Software to build AM skills

ABB partners with UWA for the future digital mine