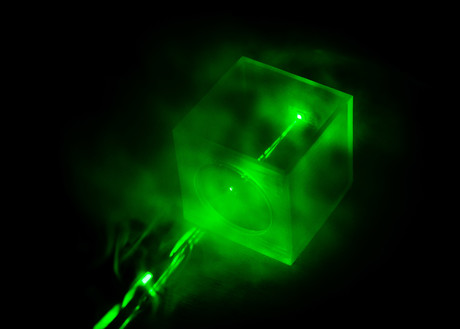 Scientists at Nanyang Technological University, Singapore (NTU Singapore) have developed a device that can identify a wide range of airborne gases and chemicals instantly.

Described in the journal ACS Nano, the prototype device is portable and suitable for rapid deployment by agencies to identify airborne hazards, such as from tiny gas molecules like sulfur dioxide. It can also identify larger compound molecules such as benzene, known to be harmful to human health. It could thus provide real-time monitoring of air quality such as during haze outbreaks, and assist in the detection of gas leaks and industrial air pollution.

Emergency scenarios require a fast and ongoing analysis of potential air contamination, such as following a natural disaster, chemical spill or illegal dumping of toxic waste, so that emergency responders can take appropriate action. Current methods of identifying gases in the air use a laboratory technique called gas chromatography–mass spectrometry (GC-MS), which is reliable but requires tedious sample collection and takes between a few hours and a few days to obtain results.

By contrast, the new device utilises Raman spectroscopy — a long-established technique for identifying chemical substances. Typically, this has been used only on solid and liquid samples, since gaseous chemicals are too diluted for the laser and detector to pick up.

To overcome this limitation, Associate Professor Ling Xing Yi and PhD student Phan Quang Gia Chuong developed a special nanostructure patch made from a highly porous synthetic material known as a metal-organic framework, which actively absorbs and traps molecules from the air into a ‘cage’. The nanostructure also contains metal nanoparticles, which boost the intensity of the light surrounding the molecules.

The result is a million-fold enhancement in the Raman spectroscopy signals, allowing for the identification of the trapped molecules. When a laser is shone on the patch from a few metres away, the light interacts with the gas molecules, causing light of a lower energy to be emitted. When analysed, this gives a spectroscopic readout in the format of a graph chart, which acts like a ‘chemical fingerprint’ corresponding to various chemicals present on the patch.

These chemical fingerprints are referenced against a digital library of fingerprints to quickly determine what chemicals have been detected. The whole process takes about 10 seconds to complete and the laser has an energy intensity of 50 mW — more than seven times weaker than in other applications of Raman spectroscopy — making the system safer to operate and more energy efficient. 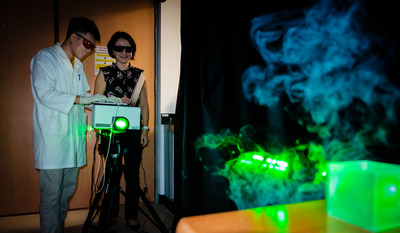 Assoc Prof Ling said the genesis of the invention was sparked by an incident in Singapore, where there were reports of a strong gas-like odour over certain parts of the island in 2017. The cause was only determined a few days later, and was traced to volatile organic compounds released by factories outside of Singapore.

Together with her husband, Dr Phang In-Yee, a project leader and scientist at the Institute of Materials Research and Engineering (IMRE), they conceptualised the idea of identifying gases instantly from a distance.

“Our device can work remotely, so the operation of the laser camera and analysis of chemicals can be done safely at a distance,” said Assoc Prof Ling. “This is especially useful when it is not known if the gases are hazardous to human health.”

The laser was tested in experiments to work up to 10 metres away and can be engineered to reach further distances. Another possible method is to use the chip to capture gases, which is subsequently analysed with a laser. 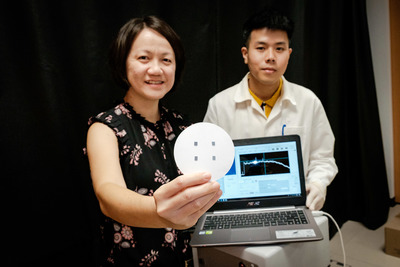 In experiments, the team showed that the device can identify airborne molecules such as polyaromatic hydrocarbons (PAH), including naphthalene and derivatives of benzene — a family of colourless industrial air pollutants known to be highly carcinogenic. It can detect PAHs at parts-per-billion (ppb) concentrations in the atmosphere as well as performing continuous monitoring of the concentration of the different types of gases like carbon dioxide (CO2) in the atmosphere, which could be a useful application in many industrial settings.

The team has filed for a patent and is now commercialising the technology for use in pollution monitoring, chemical disaster response, as well as other industrial applications.