While it has previously been recognised that bacteria communicate by means of chemical signals - which they use to develop common characteristics, including their potential pathogenic effects - different types of bacteria have different methods of communication. A team of German scientists, led by Dr Helge B Bode from Goethe University and Dr Ralf Heermann from Ludwig Maximilian University, has now succeeded in decoding a previously unknown yet widely distributed chemical type of bacterial communication.

The best known communication between bacteria occurs via the N-acyl homoserine lactone (AHL). The enzyme Luxl produces signals that are recognised by the LuxR receptor, at which point the bacteria develop certain properties and modulate their behaviour towards one another. Since a certain number of bacteria must be available for this to occur, the process is known as ‘quorum sensing’.

In the researchers’ study, published in the journal Proceedings of the National Academy of Science, the team investigated bacteria that possess a LuxR receptor but not the enzyme Luxl (the receptor is thus referred to as a LuxR solo). The deadly pathogen Photorhabdus asymbiotica was able to communicate via the signal molecule dialkylresorcinol, which recognised the associated LuxR solo. 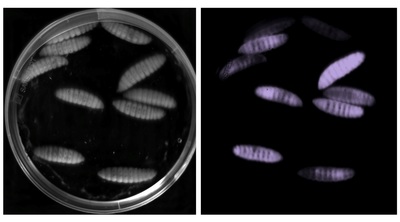 Insect larvae were infected with P. asymbiotica. Since the bacteria are bioluminescent, the larvae glow in the dark. Image credit: Ralf Heermann.

“The influence on the pathogenic properties of the bacteria is at its strongest in this ‘quorum sensing’ system,” said Dr Bode. “P. asymbiotica requires dialkylresorcinol and, in this way, coordinates the communication with the conspecifics for the successful infection.”

The researchers investigated a series of other bacterial genomes and found that the newly discovered signal pathway appears to be widely distributed. Dr Bode stated, “We identified over 100 other bacterial species - many of them pathogenic to humans - that lack LuxI, but are able to synthesise the new signal.”

The investigation of bacterial communication is of medical interest, as the pathways used could be a possible therapeutic target for new medicines. If the relevant communication options are prevented, the bacteria cannot develop their pathogenic properties. In this scenario, said Dr Bode, “the danger of resistance development would be substantially reduced”.