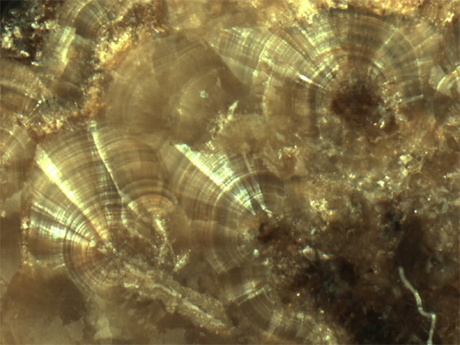 A scientist at the Australian Nuclear Science and Technology Organisation (ANSTO) has been involved in an experiment said to be the first of its kind — carbon dating a kidney stone.

It all started when Vladimir Levchenko found out he was one of the 10% of Australian men who are affected by kidney stones. Kidney stones are a common disorder, yet very little is known about their growth cycle and longevity. Furthermore, said Levchenko, “almost no-one in Australia was undertaking research in this area”.

As an expert in accelerator mass spectrometry (AMS), Levchenko decided to apply carbon-dating procedures to kidney stone samples — ie, measuring how much carbon-14 is present — to see if he could ascertain their age. He obtained the most common kind of stone — a calcium oxalate kidney stone, which contains carbon and therefore enables the use of AMS to measure the amount of carbon-14. It is believed that this is the first time radiocarbon has been used to date a kidney stone.

The first step was to sample the calcium oxalate by progressively dissolving it to extract the carbon. Later, the oxalate was combusted to CO2 and this gas converted to graphite for isotopic carbon determinations. Measurements on the 2MV Star accelerator, located ANSTO’s Centre for Accelerator Science, indicated that the stone had been growing steadily for 17.6 years.

Following his initial discoveries, Levchenko began collaborating with a Dutch research group led by Dr Dirk Kok, head of the Department of Urology at Erasmus University Medical Center, Rotterdam. Levchenko explained, “Dr Kok wanted to send over two similar samples that his team were investigating, in order to find out if they were the same age and if both contained phosphate.”

Once the stones had been sent to ANSTO’s Lucas Heights facility from the Netherlands, Levchenko provided high-resolution CT scans of the stones that depicted their interior, which showed they were not uniform and contained voids. Measurements found that the two samples were vastly different ages — 23 and seven years old, respectively — with only one containing phosphate. As the stones were of similar size, it suggested that one grew faster than the other.

“Information from the original ‘owners’ of the stones identified that the stone containing phosphate came from a person who regularly consumed soft drink — which contains phosphoric acid,” Levchenko noted. He added that once the age of one of the stones was determined, it was linked to a trauma that the patient had received when younger.

“This connection could not have been made without dating the stone,” said Levchenko.

According to Levchenko, scientists have previously not been able to make “anything near the kind of connections the radiocarbon dating has allowed”. His research was received with great interest at the 12th Meeting of European Association of Urology and has been accepted by the journal Radiocarbon.

Image caption: Microphotograph of the interior structure of a 23-year-old kidney stone made of calcium oxalate (50x magnification).