In March 2004, the spacecraft Rosetta was launched by the European Space Agency - its mission to orbit and land on the comet 67P/Churyumov-Gerasimenko. To complete the most detailed study of a comet ever attempted, the orbiter carried 11 science experiments and its lander, Philae, carried 10 additional instruments.

During its trek to Comet 67P/Churyumov-Gerasimenko, Rosetta completed three flybys of the Earth and one of Mars and made two excursions to the main asteroid belt that lies between the orbits of Jupiter and Mars. Then, after a 10-year journey through the solar system, the spacecraft arrived at the comet on 6 August 2014. Between August and November, the spacecraft orbited the comet and gathered data to characterise the environment and the comet nucleus. Then, on 12 November 2014, Rosetta’s lander, Philae, was deployed to the surface. 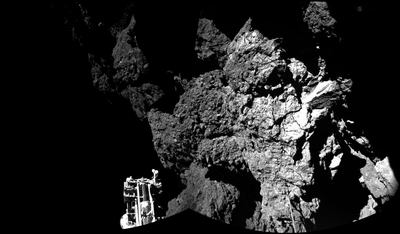 First picture of Comet 67P/Churyumov-Gerasimenko. 28 lenses made of radiation-resistant glass from SCHOTT are installed in the panorama camera system which took this picture. Photo: © ESA/Rosetta/Philae/CIVA.

There are 11 instruments on board the Rosetta orbiter. Each was provided and administered by teams from institutes across the world. The suite of instruments comprises cameras, spectrometers, magnetometers and sensors, and each has its own specific needs that must be balanced to maximise the overall science return.

As a general rule, the instruments that collect gas and dust usually want to point directly down at the nucleus of the comet. These include COSIMA, GIADA, MIDAS and ROSINA. The RPC instrument, a collection of in-situ plasma and wave sensors, also has specific pointing requirements.

The remote-sensing experiments are more varied. Depending on the investigation, they sometimes want to point straight down at the nucleus, sometimes at the limb, sometimes out towards the coma - the gas and dust environment surrounding the nucleus. Alice, OSIRIS, MIRO and VIRTIS are like this.

Not fitting directly into these classifications are RSI and CONSERT. RSI uses the high gain antenna of the spacecraft directly for its science, so any pointing constraints are dictated by the spacecraft operations. The CONSERT experiment comprises a radio antenna on the lander and one on the orbiter, to perform tomography of the comet nucleus. Science operations with CONSERT require the transmission of radio signals between these antennae, through the body of the comet.

The ~100 kg Rosetta Lander, Philae, is the first spacecraft ever to make a soft landing on the surface of a comet nucleus. The box-shaped lander was carried in piggyback fashion on the side of Rosetta until it arrived at Comet 67P. Once Rosetta was aligned correctly, the ground station commanded Philae to self-eject from the main spacecraft and unfold its three legs, ready for a gentle touchdown at the end of the ballistic descent. On landing, the legs had been designed to damp out most of the kinetic energy to reduce the chance of bouncing, and they can also rotate, lift or tilt to return the Lander to an upright position.

Immediately after touchdown, a harpoon was to have been fired to anchor Philae to the ground and prevent it escaping from the comet’s extremely weak gravity. The minimum mission target for scientific observations was one week, but it was hoped that the surface operations would continue for many months.

After being released from the Rosetta orbiter, the lander actually bounced off Comet 67P/Churyumov-Gerasimenko twice before coming to its current less-than-ideal resting spot.

Sadly, the lander’s planned mission ended after about 64 hours when its batteries ran out because of the low sunlight conditions. Although Philae went into hibernation after about 57 hours, it had already beamed back a wealth of science, delivering a full set of results that are now being analysed by scientists across Europe.

While it will take scientists a while to sift through the data collected by Philae, it looks like the probe has sent home some interesting new results. Before shutdown, one of Philae’s instruments managed to ‘sniff’ the first organic molecules detected in the atmosphere of the comet, officials with the DLR German Aerospace Center said. However, scientists still aren’t sure what kind of organics - carbon-containing molecules that are the building blocks of life on Earth - were found.

Philae also found that Comet 67P/C-G’s surface is harder than researchers initially thought it would be. Before the probe’s battery ran out, Rosetta mission controllers commanded Philae to hammer into the surface of the comet and found that the cosmic body is probably as hard as ice, according to ESA.

“Although the power of the hammer was gradually increased, we were not able to go deep into the surface,” research team leader Tilman Spohn, of the DLR Institute of Planetary Research, said in a statement. “We have acquired a wealth of data, which we must now analyse.”

An instrument onboard Rosetta has also recently made an important discovery for scientists interested in the composition of the comet’s ice and its potential implications for how Earth became a watery world.

Mission controllers on Earth commanded Philae to drill into the surface of the comet just after it came to rest in its final landing spot, but officials aren’t sure exactly how much comet material was collected by the instrument.

ESA officials are still hopeful that Philae could get in touch again as Comet 67P/C-G makes its way around the sun. It’s possible that the sunlight and temperature conditions around the lander could change as the comet gets closer to our star, allowing Philae to potentially come back to life.

The lander experiments were designed to study the composition and structure of Comet 67P/Churyumov-Gerasimenko’s nucleus.

The instruments were designed to: 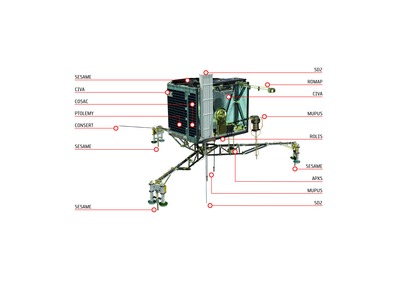 The lander structure consists of a baseplate, an instrument platform and a polygonal sandwich construction, all made of carbon fibre. Some of the instruments and subsystems are beneath a hood which is covered with solar cells. An antenna transmits data from the surface to Earth via the orbiter.

The goal of the Rosetta Alpha Proton X-ray Spectrometer (APXS) experiment is the determination of the chemical composition of the landing site and its potential alteration during the comet’s approach to the Sun. The data obtained will be used to characterise the surface of the comet, to determine the chemical composition of the dust component and to compare the dust with known meteorite types. These results will be brought into context with other measurements made on the lander and the orbiter to fully obtain a more complete picture of the present state of the comet, and to draw conclusions on its evolution and origin.

Lowered to within 4 cm of the comet surface, APXS will detect alpha particles and X-rays, which will provide information on the elemental composition of the comet’s surface.

Six identical micro-cameras take panoramic pictures of the surface. A spectrometer studies the composition, texture and albedo (reflectivity) of samples collected from the surface.

CONSERT (COmet Nucleus Sounding Experiment by Radio-wave Transmission) is a complex experiment that will reveal the internal structure of a comet nucleus for the very first time. Instrument components are found on both the orbiter and the lander, the idea being to establish a radio link that passes through the comet nucleus. The way in which the radio waves propagate through the nucleus will give scientists clues as to its structure and nature.

CONSERT will examine many properties of the comet nucleus, such as:

After analysis, the CONSERT data will allow scientists to build up a detailed structural view of the comet nucleus, which will in turn constrain scenarios on how it was formed. The origin of the comet is closely linked to the conditions in the Primitive Solar Nebulae some 4600 million years ago. CONSERT will therefore play a vital role in fulfilling Rosetta’s objective to further our understanding of the origin and formation of the solar system.

The COmetary SAmpling and Composition experiment COSAC is one of the two ‘evolved gas analysers’ (EGAs) onboard the Rosetta-Lander. Whereas the other EGA, Ptolemy, aims mainly at accurately measuring isotopic ratios of light elements, the COSAC is specialised in detection and identification of complex organic molecules.

Ptolemy is the first example of a new concept in space instrumentation, which has been devised to tackle the analytical challenge of making in situ isotopic measurements of solar system bodies. The instrument concept is termed MODULUS, which is taken to mean Methods Of Determining and Understanding Light elements from Unequivocal Stable isotope compositions.

The scientific goal of the MODULUS concept is to understand the geochemistry of light elements, such as hydrogen, carbon, nitrogen and oxygen, by determining their nature, distribution and stable isotopic compositions.

The size of a small shoe box and weighing less than 5 kg, Ptolemy will use gas chromatography/mass spectrometry (GCMS) techniques to investigate the comet surface and subsurface.

The descent and down-looking ROLIS Camera (ROsetta Lander Imaging System) will deliver first close-ups of the environment of the landing place of comet 67P/Churyumov-Gerasimenko during the descent. A CCD camera will obtain high-resolution images during descent and stereo panoramic images of areas sampled by other instruments.

After landing ROLIS will make high-resolved investigations to study the structure (morphology) and mineralogy of the surface.

The ROsetta Lander Magnetometer and Plasma Monitor (ROMAP) is a multisensor experiment. The magnetic field is measured with a fluxgate magnetometer. An electrostatic analyser with integrated Faraday cup measures ions and electrons. The local pressure is measured with Pirani and Penning sensors. The sensors are situated on a short boom. The deployment on the surface of a cometary nucleus demanded the development of a special digital magnetometer of little weight and small power requirements. For the first time a magnetic sensor will be operated from within a plasma sensor. A prototype of the magnetometer, named SPRUTMAG, was flown on space station MIR.

The sampling, drilling and distribution (SD2) subsystem will provide microscopes and advanced gas analysers with samples collected at different depths below the surface of the comet. Specifically, SD2 can bore up to 250 mm into the surface of the comet and collect samples of material at predetermined and/or known depths. It then transports each sample to a carousel, which feeds samples to different instrument stations: a spectrometer, a volume check plug, ovens for high and medium temperatures and a cleaning station. SD2 will be accommodated on the flat ground-plate of the Rosetta, where it will be exposed to the cometary environment.

In SESAME (Surface Electrical, Seismic and Acoustic Monitoring Experiments) three instruments will investigate the comet’s outer layers. A cometary acoustic sounding surface experiment will measure the way sound travels through the surface; a permittivity probe will look at its electrical characteristics; and a dust impact monitor will measure dust falling back.

The results of SESAME will help in understanding how comets, have formed and thus, how the solar system, including the Earth, was born.