The decomposition of dead bodies is not the most aesthetically pleasing area of science to study, but for Professor Shari Forbes, it is by far the most interesting.

As a graduate of the first forensic science degree in Australia, at the University of Technology, Sydney (UTS), Professor Forbes is excited to be involved in a major step forward in her field: the first facility in the Southern Hemisphere to study decomposition using donated human cadavers.

After a stint at the University of Ontario Institute of Technology (UOIT) from 2005-2012, where she helped establish its forensic science program and two associated facilities, Professor Forbes returned to her alma mater as a professor and ARC Future Fellow in the Centre for Forensic Science. Through her work in taphonomy - the study of organic remains from the time of death to the time of discovery - she aims to identify an accurate biochemical signature for estimating time since death, in order to enhance the performance of sniffer dogs tasked with locating human remains.

So far, due to approval issues, Professor Forbes has been restricted to working with porcine cadavers - an analogue for humans with a similar decomposition process. In recent studies, the carcasses were placed in and under the ground in an outdoor laboratory, while their degree of composition, odour and environmental variables were measured over several weeks. Published in the journal PLOS One, the work enabled Professor Forbes to identify “hundreds of volatile organic compounds which comprise the odour of decomposition”, she said. 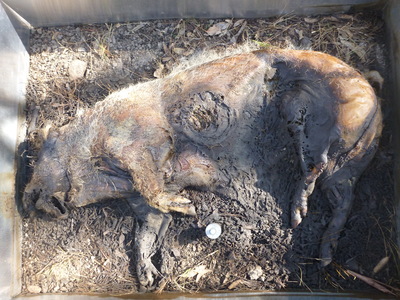 But ongoing discrepancies continue to plague various researchers’ studies in this area, which may be a result of unknown differences between pig and human decomposition and/or environmental variables. With the establishment of the new taphonomy facility - and the UTS body donation program, which allows the public to leave their body to science - this will hopefully change.

“The opportunity to conduct this research using human remains will allow us to determine a complete and accurate decomposition odour profile for our specific environment,” said Professor Forbes. “This will assist us to identify the key compounds to which cadaver dogs alert, and we can use this information to improve their training and thus improve their success when deployed to search for victim remains - such as missing persons, victims of homicide and victims of mass disasters.”

Cadaver dog training methods vary throughout the world. Professor Forbes noted that in the UK, some of the animals are trained using pig remains, whereas Australian dogs are exposed to human blood, decomposition fluid, grave soil, teeth or bones. By allowing researchers to compare the scents of these training aids and porcine remains with human cadavers, the facility will be able to determine just how accurately they serve as analogues - and pass on their data to those who don’t have such access to human remains. 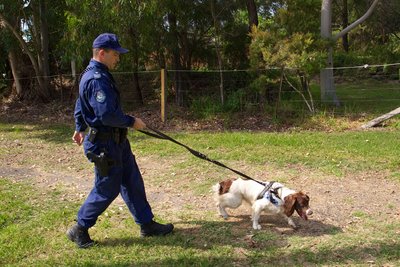 “The facility will be open to a broad range of disciplines who can benefit from the research being conducted,” said Professor Forbes. “This includes forensic chemists, biologists, anthropologists, odontologists, toxicologists, archaeologists and palaeontologists - just to name a few!”

For example, researchers from UOW’s Centre of Archaeological Science plan to use the facility to study bone decomposition and the geological and chemical changes in burial sites over time, which will assist with interpreting archaeological and paleontological sites both in Australia and overseas. Professor Forbes continued, “Our intent is to benefit as many disciplines as possible so that we can advance these sciences in Australia and internationally.”

These benefits have been recognised by the Australian Research Council (ARC), which has awarded the facility with a $430,000 Linkage Infrastructure, Equipment and Facilities (LIEF) grant. This grant, combined with Professor Forbes’ own experience from her work at UOIT, will enable the building to be established on land owned by UTS on the outskirts of Sydney, where it is expected to be completed by around mid-2015.

At a personal level, the facility will provide Professor Forbes with a new opportunity to conduct research with real-world impacts; indeed, the reason she studied forensic science in the first place was because “the application was immediately clear to me”. And with the facility’s research expected to benefit not only the police and other researchers, but also the families of those whose remains might be discovered, it is obviously clear to the community as well.

“I am always amazed by how interested people are in my research, particularly given that it is not exactly a topic that most people really discuss,” Professor Forbes admitted. “So although the facility will not be open to the general public, I have learnt the importance of talking about my research to the community so that they understand the impact and can engage in discussion around it. My intent is to continue doing this with the new facility.”