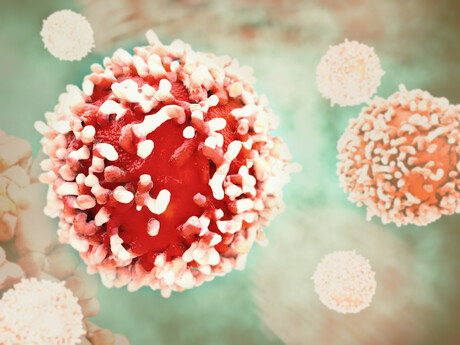 Treatment for early-stage breast cancer often includes breast-conserving surgery, where the tumour and some surrounding healthy tissue (the tumour margin) are removed.

Now scientists are developing an imaging method that would allow surgeons to better identify cancerous cells in the tumour margins during surgery, which could lead to a reduction in follow-up breast cancer surgeries and reduce rates of breast cancer recurrence. The research was funded by the US National Institute of Biomedical Imaging and Bioengineering (NIBIB) and the results have been published in the journal eBioMedicine.

“Today, surgeons primarily rely on their sense of sight and touch to distinguish between healthy and cancerous tissues during surgery, which may lead to incomplete removal of the tumour,” said Dr Tatjana Atanasijevic, Manager of the NIBIB’s Molecular Probes and Imaging Agents program. “This imaging technique provides real-time visual feedback during surgery, allowing surgeons to better gauge the breast tumour margins, and ultimately optimising surgical excision.”

The technique relies on a method known as near-infrared imaging, which utilises probes that fluoresce under near-infrared light. These fluorescent probes can allow clinicians to visualise features beyond the tissue surface, such as blood vessels or tumours, which can help to guide surgical procedures. However, there aren’t many near-infrared agents that are approved for clinical use by the US Food and Drug Administration (FDA), and those that are approved are non-specific, meaning that they don’t home in on a specific target in the body. Furthermore, the only near-infrared probe approved for surgery, indocyanine green (ICG), doesn’t stay in the bloodstream for very long and therefore its utility for image-guided tumour resection is somewhat limited.

To overcome the limitations of traditional near-infrared imaging probes, researchers from the University of Illinois Chicago created a new probe specifically designed to detect cancerous cells within breast tumour margins in real time during surgery. This probe combines the FDA-approved dye ICG with a non-toxic, tumour-targeting, cell-penetrating peptide known as p28.

“Our research group has previously reported that p28 preferentially enters into various human breast cancer cells and actually induces anti-proliferative effects,” said Dr Tohru Yamada, an associate professor at the University of Illinois College of Medicine and senior author on the new study. What’s more, p28 has been evaluated in early clinical trials and was well tolerated by patients.

“Our new probe, termed ICG-p28, can selectively illuminate breast cancer cells under near-infrared light and thereby facilitates the image-guided removal of cancerous tissue at the time of surgery,” Yamada said.

The researchers first needed to determine how well their imaging probe could accurately delineate breast cancer from healthy tissue. To do this, they created a breast cancer cell line that expresses a protein called iRFP, which fluoresces under near-infrared light. This way, when the researchers establish their breast cancer models by injecting mice with this particular cell line, they can precisely visualise the exact shape and size of the breast tumours.

After establishing the breast cancer models, the researchers injected the mice with their imaging probe, waited 24 hours, excised the tumours, and compared the fluorescent signals between iRFP and ICG-p28. They found that the two signals had excellent overlap, indicating that their imaging probe specifically targets breast cancer tumours for an extended period of time.

Next, Yamada and colleagues used their probe to guide tumour resection in two models of breast cancer and watched the animals for cancer recurrence. Once the mice developed tumours, the researchers injected them with either ICG-p28, ICG alone, or a control buffer solution without any near-infrared dye, and waited 24 hours. Then the tumours were removed, aided by image-guided visualisation using near-infrared light, or using traditional palpation and direct visualisation (for mice injected with the control buffer solution). 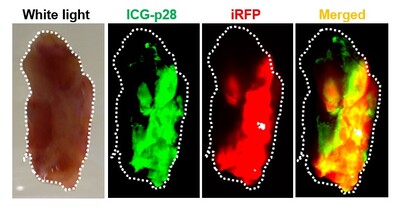 Yamada noted that the research is still in the early stage, and that the evaluation of this imaging probe in a clinical trial will be an important next step to determine how well it works in human patients.