Plumbing the depths of ancient Naples 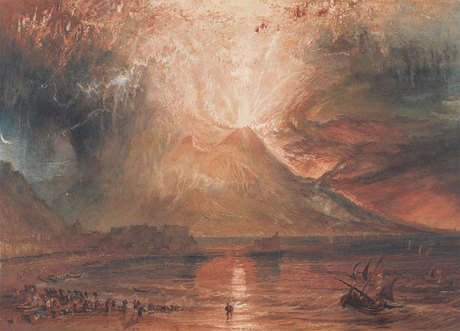 If you have a passing interest in ancient history, you’re probably familiar with the eruption of Mount Vesuvius in 79 AD and the devastating effect it had on the cities of Pompeii and Herculaneum. But have you ever wondered how the volcano’s eruption impacted other parts of the Roman Empire?

By examining lead isotopes taken from the harbour at Naples, a multidisciplinary team of geoarchaeologists, archaeologists and geochemists has revealed the hidden history of an ancient Roman water distribution system. Published in the Proceedings of the National Academy of Sciences, the study was led by Hugo Delile from France’s National Centre for Scientific Research (CNRS), in collaboration with University of Glasgow, University of Southampton and The University of Naples Federico II. Financial support was provided by researchers from Australia’s own Macquarie University.

The researchers set out to discover the impact of the 79 AD eruption on the water supply of Naples (then known as Neapolis) and the surrounding region, which was at the time supplied with water in lead pipes extending from the 140 km-long Aqua Augusta aqueduct. As part of this, Delile and his colleagues measured lead isotopic compositions of a 5.5 m-long sedimentary sequence from Naples, recently excavated during the construction of a new underground line. The sequence records the history of the city during the first six centuries AD, with each centimetre of the sediment representing approximately one year’s build-up during the period of interest.

“The sedimentary deposits of the ancient harbour cannot be fully appraised without extensive knowledge in geomorphology, a related discipline of geography,” said Delile, who added that these deposits have been dated via archaeological materials (wrecks, anvils, shoes, etc) found in harbour muds. The sediment corresponding to the eruption, located between 486 and 436 cm below sea level, was easily recognisable, Delile and his fellow researchers explained, “by shell debris, abundant fragments of wood, Posidonia, and pottery, as well as large number of rolled pumice pebbles”. 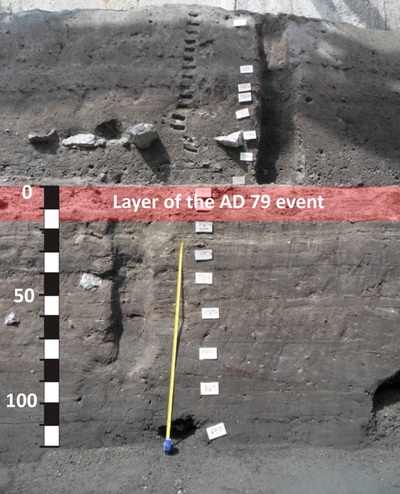 An example of the harbour stratigraphic section investigated in the study. ©Hugo Delile

In total, 61 samples were taken and analysed for lead (Pb) concentrations and isotopic compositions, using quadrupole inductively coupled plasma mass spectrometry (Q-ICP-MS) and multicollector inductively coupled plasma mass spectrometry (MC-ICP-MS) at the Ecole Normale Supérieure de Lyon. Lead isotope compositions were measured on the sediments to separate the local environment lead background residing in minerals from imported components. Samples were leached in chloroform and dilute hydrogen bromid (HBr), and lead isotope ratios were measured on the leachates and their residues.

Lead has four stable isotopes: 204Pb, 206Pb, 207Pb and 208Pb. The researchers found that the isotopic composition of leachates from the harbour sediments differed from those of lead native to the region, suggesting contamination from imported lead used in the ancient plumbing. The origin of the imported lead has since been placed in Western Europe (Spain, the Alps, France, Germany and England).

“As with over 75% of the research carried out, when we think to look for something, it’s totally something else comes out,” Delile told Lab+Life Scientist. “In the case of the ancient port of Naples (as in Rome), we did not expect to find that the excess of lead was associated with the use of the pipes and the water supply system more generally.”

Interestingly, the authors observed an abrupt change in isotopic composition in a sediment layer 15 cm above the layers associated with the 79 AD eruption (-421 cm), thus postdating the eruption by approximately 15 years and suggesting a switch to different pipes. “The transition is sharp,” they said, revealing “a major shift” in the source of the water flowing into the harbour. 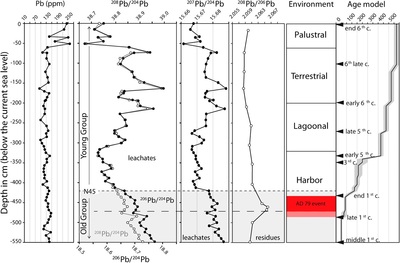 Downcore variations of 208Pb/204Pb, 206Pb/204Pb and 207Pb/204Pb in leachates, 208Pb/206Pb in residues and Pb concentrations. The tephra unit of the AD 79 event is indicated by red shading. The parallel drift of 208Pb/204Pb and 206Pb/204Pb through time towards geologically old Pb reflects an increasing influence of pollution by the Pb pipe network and is a measure of urban development.

So why might this shift have occurred? The authors report that the eruption of Vesuvius likely damaged the Neapolitan water supply network in one of three ways:

Whatever the exact cause of the damage, the researchers say there is little doubt that “after the disaster of the AD 79 volcanic eruption, the Aqua Augusta required major repairs and replacement of multiple lead pipe conduits” — repairs which would have taken approximately 15 years to carry out if begun immediately. It is therefore likely that the old, likely damaged system kept bringing water to the harbour while the new network was being constructed.

The study goes on to reconstruct the water network from the first to sixth centuries AD. Lead is found to be increasingly present in the sediments, suggesting an expansion of the hydraulic network or its intensification in the areas already supplied. The researchers stated, “A spectacular trend of decreasing 206Pb/204Pb and 208Pb/204Pb isotope ratios with time attests to a steady increase of the imported component, even through the AD 79 eruption, until -325 cm (the first half of the fifth century AD).”

From the beginning of the fifth century, the sediments become less contaminated. This is attributed to a number of factors, including barbarian invasions (the aqueduct was seized so as to cut off the town’s water supply), new eruptions of Vesuvius in 472 and 512 AD, epidemics and the city’s economic and administrative collapse, all contributing to the final breakdown of the Aqua Augusta somewhere between 399 and 472 AD.

While the authors suggest that a reduced peri-urban water distribution system was brought back to use, the dramatic decrease in contamination shows that “these repairs were much slower and of more limited extent than those in the aftermath of the AD 79 eruption, reflecting the comparatively much weaker administration and resources of the fifth century Bay of Naples”. It was only at the end of the sixth century that there was a final increase in contamination, owing to the donation of a stamped lead pipe to the town. This suggests “renewed attention to the water distribution system of Neapolis”, the researchers wrote, “occasioned by the expanding territory and power of the town and possibly an influx of inhabitants from neighboring declining towns”.

By studying metal pollution in ancient sediments, Delile and his colleagues have shown how lead isotopes can be used to retrace the history of a region. Not only could this method be applied to other civilisations and geographical areas, it could also provide new perspectives on the dynamics of the human footprint on the environment. It is thus a valuable tool for archaeologists, historians, geographers and scientists alike.