Should I eat the vegetables I grow in my backyard? — Measuring industrial contamination 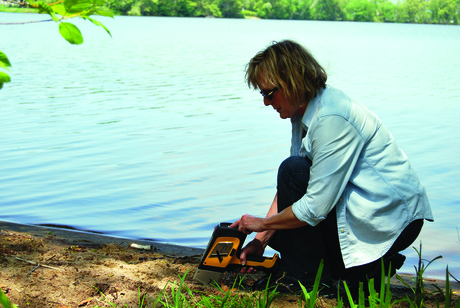 Industrialisation has left much of the urban environment contaminated with a variety of heavy metals, chemicals and pesticide residues. Research by a team from Macquarie University has produced a series of maps that plot the concentrations of metal pollutants across cities like Sydney and Darwin, and towns such as Mount Isa and Port Pirie.

Results of the survey indicate the spread of contamination in many ways reflected the growth of major cities, with the highest concentrations in older suburbs. The contaminant of most concern across Sydney backyards is lead. It would be expected that there would be contamination in a major city explained the director of the Macquarie team, Professor Mark Taylor. “We live in an industrial environment. We have used lead-based petrol and paint for most of the 20th century.”

One technique for measuring levels of contaminant metals that is key to the work being conducted by the Macquarie team is X-ray fluorescence spectrometry (XRF). Simple screening for toxic metals is performed by placing an analyser — such as the Delta Premium from Olympus — directly onto soil or dust. The analyser provides detection of metals for site characterisation, contamination tracking, remediation monitoring and property evaluations.

The latest portable X-ray fluorescence (pXRF) analysers, such as the Delta Premium, have been developed specifically for complete environmental investigations of metal contaminants in a wide range of industrial and domestic materials. The high-power, high-performance, rugged unit allows in situ analysis in a wide range of harsh environments from remote mining and exploration sites to backyards in major urban centres.

The latest model Delta unit offers increased speed and improved sensitivity. It also lowers the limit of detection (LOD) for challenging elements such as cadmium, barium, lead, mercury and tin.

According to Andrew Saliba, regional sales specialist with Olympus, the traditional use of pXRF has been for alloy identification, grading ore, mineral exploration, metallurgy and mine site remediation. “The technology has been refined and is now often used by environmental consultancies specialising in contaminated land remediation and recycling companies needing to determine what materials are in waste products,” he said. 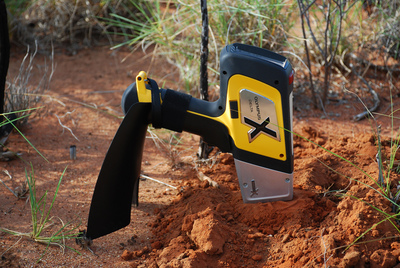 Macquarie researcher Marek Rouillon has been working to evaluate the reliability and repeatability of XRF analysis on environmental samples. Professor Taylor and Rouillon regularly present their findings at seminars, outlining the spread of heavy metal contamination in suburban gardens in addition to explaining the application and relevance of the pXRF instrument for this project.

Typical ‘natural’ or ‘background’ concentrations of lead for the Sydney region are in the range 20–30 mg/kg or parts per million (ppm). However, due to the intense use of lead-containing products, much of Greater Sydney has been contaminated with the metal. Their results indicate Sydney residences have a mean soil lead concentration of 220 mg/kg, which is approximately 10 times the typical natural background for Sydney’s soils and rocks.

In 2012, the Centres for Disease Control and Prevention in the USA stated that there is no safe blood lead level for young children. Prior to this, health authorities around the world had issued guidelines for ‘acceptable’ levels of lead contamination, but surveys and reports have shown that even at the lowest levels there were health effects in children, including impaired brain development and behavioural disorders. 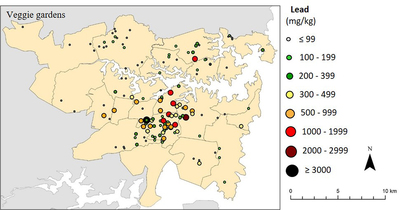 VegeSafe seeks to inform people about metals and metalloids in their garden soils and provides a free sampling program for domestic and community garden soils. Participants submit soil samples from private or community gardens and receive a formal report and links to information and advice about ‘what to do next’ if the soils contain elevated concentrations of metals and metalloids. “The VegeSafe motto is ‘Carry on Gardening’,” Professor Taylor said, “because this is exactly what we want people to do knowing that their soils are metal-free as is the produce from their gardens.”

According to Rouillon, the simplest mitigation technique for householders would be to cover the contaminated soil with either grass or mulch, to effectively reduce the potential generation of dust if the soil is dry and gets picked up by wind.

“Our recommendations are determined by different scenarios and contaminant concentrations,” Rouillon said. “VegeSafe provides specific recommendations and advice to a gardener for their particular situation.”

Other uses of pXRF analysis include extreme-weather debris migration studies, agriculture soil inspections, and construction and demolition waste sorting. A further use is as part of hazardous waste screening for disposal classification.

Director of the Macquarie team is Professor Mark Taylor, an academic and former commissioner of the NSW Land and Environment Court. Senior researcher Marek Rouillon and the rest of the group investigate environmental pollution and risks to human health from aerosols, dusts, sediments, soil and water. The team works in a range of locations across Australia, including Broken Hill, Mount Isa, Newcastle, Port Pirie, Sydney and Townsville.

Professor Taylor also provides expert evidence and advice to government, industry, lawyers and community groups on a range of environmental matters, particularly environmental pollution. He has also written more than 100 research papers and reports that have been published in peer-reviewed journals, in addition to articles for magazines and newspapers.

Image at top of page: A technician analysing soil samples in a public park.