Tiny spectrometer made of a single nanowire 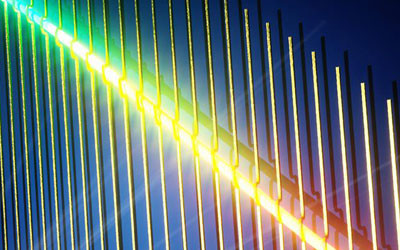 Scientists have designed an ultra-miniaturised device, made from a single nanowire 1000 times thinner than a human hair, that could image single cells without the need for a microscope or make chemical fingerprint analysis possible from within a smartphone camera.

Claimed to be the smallest spectrometer ever designed, the device could be used in potential applications such as assessing the freshness of foods, the quality of drugs or even identifying counterfeit objects. It has been described in the journal Science.

In the 17th century, Isaac Newton, through his observations on the splitting of light by a prism, sowed the seeds for a new field of science studying the interactions between light and matter — spectroscopy. Today, optical spectrometers are essential tools in almost all fields of scientific research, telling us everything from the processes within galactic nebulae down to the characteristics of protein molecules.

The majority of today’s spectrometers are based around principles similar to what Newton demonstrated with his prism: the spatial separation of light into different spectral components. Such a basis fundamentally limits the size of spectrometers: they are usually bulky and complex, and challenging to shrink to sizes much smaller than a coin. Now, researchers from the University of Cambridge have overcome this challenge to produce a system up to 1000 times smaller than those previously reported.

Working with colleagues from the UK, China and Finland, the Cambridge team used a nanowire whose material composition is varied along its length, enabling it to be responsive to different colours of light across the visible spectrum. Using techniques similar to those used for the manufacture of computer chips, they created a series of light-responsive sections on this nanowire.

“We engineered a nanowire that allows us to get rid of the dispersive elements, like a prism, producing a far simpler, ultra-miniaturised system than conventional spectrometers can allow,” said first author Zongyin Yang. “The individual responses we get from the nanowire sections can then be directly fed into a computer algorithm to reconstruct the incident light spectrum.”

“When you take a photograph, the information stored in pixels is generally limited to just three components — red, green and blue,” added co-first author Tom Albrow-Owen. “With our device, every pixel contains data points from across the visible spectrum, so we can acquire detailed information far beyond the colours which our eyes can perceive. This can tell us, for instance, about chemical processes occurring in the frame of the image.”

The researchers hope the platform they have created could lead to an entirely new generation of ultracompact spectrometers working from the ultraviolet to the infrared range. Such technologies could be used for a wide range of consumer, research and industrial applications, including in lab-on-a-chip systems, biological implants and smart wearable devices.

One of the most promising potential uses of the nanowire could be in biology. Since the device is so tiny, it can directly image single cells without the need for a microscope. And unlike other bioimaging techniques, the information obtained by the nanowire spectrometer contains a detailed analysis of the chemical fingerprint of each pixel.

“Our approach could allow unprecedented miniaturisation of spectroscopic devices, to an extent that could see them incorporated directly into smartphones, bringing powerful analytical technologies from the lab to the palm of our hands,” said Dr Tawfique Hasan, who led the study.

The Cambridge team has filed a patent on the technology, and hopes to see real-life applications within the next five years.

This story is a modified version of a news item published by the University of Cambridge under CC BY 4.0.