Working hard for the mummy 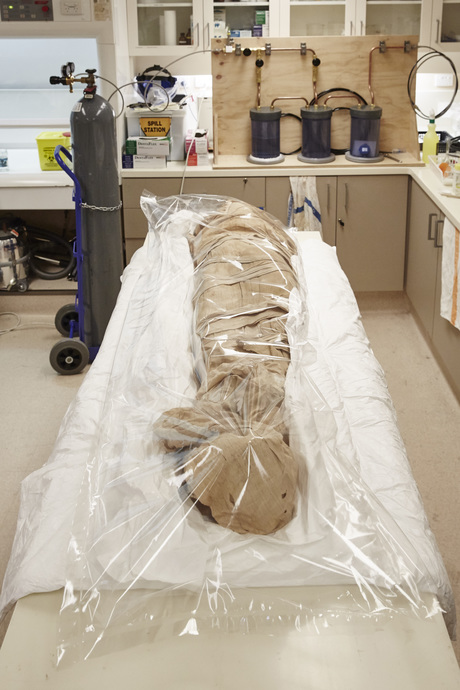 Sydney University Museums (SUM) is the proud owner of several ancient Egyptian artefacts, including monumental sculptures, inscriptions, organic materials and, of course, mummies. As part of its efforts to preserve these >2000-year-old pieces of history, SUM engaged the expertise of gas company BOC to help update its anoxic (absence of oxygen) treatment program.

Anoxic treatment was originally developed in the 1960s and is used by many museums globally to ensure artefacts’ survival, primarily by preventing insect attack. Contemporary anoxic treatment sees artefacts placed in oxygen-tight bags which are flushed with nitrogen and sealed with oxygen scavengers — similar to the ones you remove from sealed long-life food packaging — which are designed to remove any oxygen that remains in the bag. Once suitably stored, the objects are protected from deterioration resulting from fluctuating or excessively high or low humidity levels and damage from exposure to light.

Yet despite anoxic treatment being a mainstay of the museum world for a long time now, SUM Conservator Alayne Alvis had to push for its usage at the museums since her appointment eight years ago.

“We just didn’t have the gear and the space to do it,” Alvis said. “And this is a treatment that we really ought to be able to do. For something like a mummy, you can only do an anoxic treatment. Other treatments might involve freezing — you can’t do that to a mummy.

“You can do very small-scale treatments just by using oxygen scavengers in your bag, but you’re very limited, because if you start using more than a couple per treatment, it starts getting very expensive.”

Other museums have solved this problem by building their own systems, but Alvis was the first to admit that she has “no skill in that area”. As such, she took advantage of the University of Sydney’s contract with BOC, supplying the company with literature and concept sketches of the nitrogen purging process in the hope that it would come up with a suitable system.

“I wanted to make sure that we had a system that was compliant with any safety requirements the university had, and that would actually do the task that I needed it to,” said Alvis.

Site visits allowed the BOC team, led by John Roynon, to familiarise themselves with the task, how museum staff intended to use the equipment and the special needs of the artefacts. Although Roynon had not worked in a museum environment before, he noted that “the whole process of removing oxygen from an environment to preserve products is very common”.

“We took an old concept and brought it up to date, made it comply with current legislation and considered all the safety assets which had never really been considered before,” Roynon said. “And also, designing it for ease of use so the people doing it could repeat it time and time again without much difficulty and get the same result.”

One particular consideration was that the first major treatment using the nitrogen purge system would be treating two of the mummies held by SUM’s Nicholson Museum — artefacts which, as Alvis pointed out, were once human brings.

“We discussed any cultural issues when working with human remains at length with the BOC engineer on-site,” said Alvis. “We are very mindful that we are dealing with human beings and try to treat them with respect.”

BOC understood the importance of keeping the artefacts in a constant environment, protected from any drastic fluctuation in humidity, light and gas levels. The company also had to consider the issue of preserving these ancient objects with pure, dry nitrogen.

“The dryness of the gas creates a problem for them, because these old artefacts are very brittle and need quite a high humidity level to keep them supple and stop them from just breaking and crumbling away,” noted Roynon. “So we wanted the nitrogen atmosphere and we wanted the low oxygen content, but we actually needed a relatively high humidity.”

With this in mind, BOC developed a tailored process to deliver nitrogen at the correct relative humidity of around 50%. The process involves placing the artefact in a nearly completely sealed bag with two small openings for nitrogen injection and venting.

Once the nitrogen supply has been tested, the gaseous nitrogen is passed through a series of chambers before being used to purge the atmosphere from the bag. The first chamber is used to pass the nitrogen through water to humidify it; this is then mixed with dry nitrogen in the second chamber.

The resultant mixture is then analysed for correct relative humidity in a third chamber with a hygrometer before being applied to the bag containing the artefact. When the humidified nitrogen passes into the bag at opening, it causes the atmosphere to flow out of the bag from the other opening. 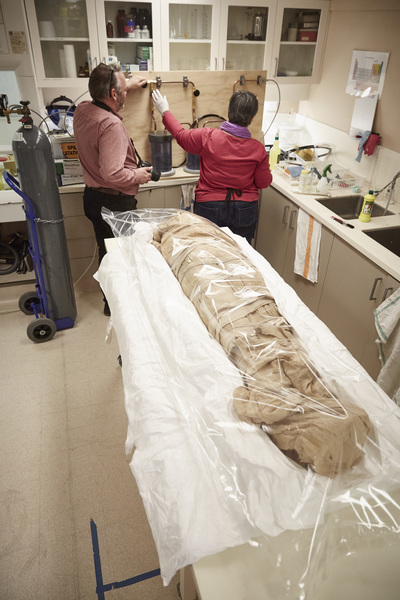 The use of humidified nitrogen has enabled SUM to protect a wider range of artefacts from deterioration, including large and vulnerable objects like mummies. Alvis said, “It’s added a string to our bow; it’s been able to make us do things that we weren’t able to do in the past.”

Equally important was the prevalence of safety features in the system design, with Roynon saying some people don’t realise that nitrogen is an asphixiant — and all it takes is a small depletion in oxygen levels before its effects can take hold.

“So bringing nitrogen into a closed and fairly small environment presents some risks in that respect, and it’s about understanding those risks and making sure there’s adequate ventilation and that you can’t release so much nitrogen into the air that you’re presented with a low-oxygen situation,” he said.

“You’ve got a cylinder of nitrogen which has a high pressure of 200 bar and you’ve got to make sure that anything you’re applying gas into can withstand whatever pressures you put into them.”

As such, BOC’s equipment includes in-built safety features such as single-direction flow valves and a pressure release valve, ensuring the system doesn’t fail even if the operator does something wrong. Alvis, who has trained herself up in the use of gases, explained, “If the pressure in the system gets too high, the gas will bleed off and it will make a noise, so you know it’s time to turn the pressure down.”

The equipment is now permanently based at SUM, where Alvis expects it to remain for the next 10–20 years — saving the museums time and money in the process.

“I can just walk in, do a treatment straight away; it’ll take me half an hour, and with a helper I can maybe pack 15 to 20 items in the course of a day,” she said.

“The cost of your consumables is much lower, because a tank of nitrogen will set you back $9 for a couple of cubic metres. So it’s a budgetary thing as well. I can do more with the same amount of money.”

As for Roynon, he’ll be adding his work with SUM to the long list of projects he’s completed during his time with BOC.

“The gas industry pretty much touches every other industry,” Roynon said. “You don’t know what’s going to come round the corner.”