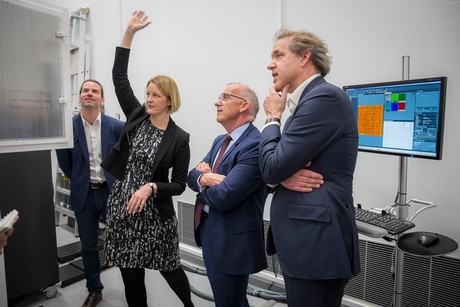 The Thermo Fisher Themis-Z TEM is believed to have the highest resolution of any microscope in Australia, providing researchers with unparalleled access to the mysteries of the atomic structure of materials. Standing 4.5 m tall, the microscope is housed in the $150 million Sydney Nanoscience Hub in a room that is shielded from electromagnetic interference and ‘floats’ architecturally independent from the building to minimise vibrations.

The aberration-corrected transmission electron microscope in the Sydney Nanoscience Hub.

The TEM is the only such microscope in Australia that is monochromated and double corrected, meaning it can simultaneously analyse the atomic structure and the spectral nature of materials. This technique enables the machine to obtain images with resolution better than 0.06 billionths of a metre (0.06 nm) — about 10 times smaller than the distance between silicon atoms or five times smaller than the distance between carbon atoms in diamond.

Available for use by industry, the microscope has applications in geosciences, mining, chemical and advanced manufacturing industries. It is critical for the design of semiconductor structures such as those fabricated in cleanrooms at the Research and Prototype Foundry in the Sydney Nanoscience Hub.

According to University of Sydney Vice-Chancellor and Principal Dr Michael Spence, vision, hard work and collaboration will yield results through the science this instrument can facilitate. For example, 2018 Eureka Prize winner Professor Thomas Maschmeyer said the new machine will be a boon to his research into renewables.

“Defects in functional materials are often critical to performance, be that mechanical, electronic, optical or chemical,” Prof Maschmeyer said. “The new instrument will allow us to probe active sites, integral for catalysis or energy storage, with atomic clarity.”

Prof Julie Cairney, Director of Sydney Microscopy & Microanalysis, is meanwhile working on new materials used to build life-saving stents during heart surgery. The new microscope will provide essential information about the structure and stability of these materials, allowing her team to be more effective in their work.

“With this device, we not only get to see the atomic structure but simultaneously analyse chemical information, such as inter-atomic forces, which is a huge advantage in materials science,” Prof Cairney said. “The research application space is truly vast.”

The device was launched by NSW Chief Scientist & Engineer Professor Hugh Durrant-Whyte in his first week of official functions, alongside two Nobel Laureates in Chemistry visiting Sydney for the 19th International Microscopy Congress.

Columbia University’s Prof Joachim Frank was awarded a Nobel Prize last year for developing another innovative type of transmission electron microscopy, known as cryo-TEM, which is able to determine biological structures in solution to high resolution. The University of Sydney will soon acquire a cryo-TEM to add to its array of scientific infrastructure.

“I want to emphasise the role of scientific infrastructure,” Prof Frank said at the launch. “I’ve done most of my work computationally — and that data had to come from somewhere from people who can operate these microscopes.

“It is from efforts such as what I see happening here at Sydney where this happens. This really is a milestone for your institution.”

The IR VIVO system from Photon etc. is a turnkey hyperspectral preclinical imager optimised for...

The ImageXpress Micro Confocal High-Content Imaging System, from Molecular Devices, is a...