What's better than one diffractometer? Two! 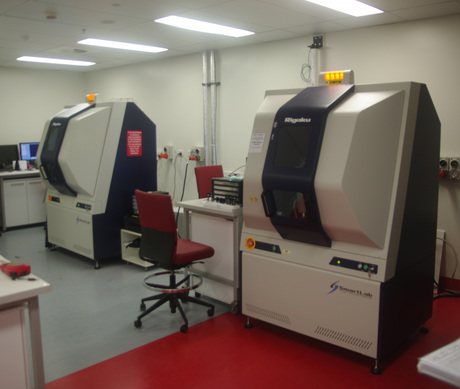 The Central Analytical Research Facility (CARF) at Queensland University of Technology (QUT) has commissioned a pair of Rigaku SmartLab X-ray diffractometers to cater for its particularly demanding requirements. Both systems were installed and commissioned in July, with user training carried out by a Rigaku applications specialist from Japan.

Following an exhaustive selection process led by CARF Project Manager Tony Raftery, the team chose the Rigaku diffractometers due to their ease of use and versatility. This is mainly attributed to the company’s Guidance software, which helps users design experiments and the required configuration changes. The optically encoded attachments and smart cabling, making the systems as student-proof as possible, were also key factors in winning the bid.

Although the two systems are basically the same and co-located in the same lab, they are destined to lead somewhat different lives. One system will be dedicated to routine work and is equipped with a 48-sample auto changer that facilitates high throughput and unattended operation; however, some of the capability of the second machine can also be transferred across.

The other machine will be used primarily for research support purposes, where it will be used in various different configurations to perform studies under a range of different experimental conditions. It includes a range of attachments that allow dynamic studies to be carried out at cryogenic and elevated temperatures, as well as vacuum, inert, air and other controlled gas environments. A host of other stages will enable other detailed studies to be performed, including thin film analysis.

Both systems are equipped with the latest-generation HyPix 3000 Hybrid Pixel Array Detectors (HPAD). These ultrahigh-speed detectors will enable measurements to be carried out as quickly as possible while at the same time offering high spatial resolution. HPAD detectors are based on semiconductor technology and hence generate no noise while offering high spatial resolution.

The benefit of having twin systems is that the attachments can be used on either sibling according to demands, with other attachments also available to further expand their analytical capabilities down the track. Furthermore, the user interfaces are the same, so no additional training is required.

Users are now using the diffractometers to investigate a range of new and exciting materials. Areas of research will include solar cell materials, advanced materials for batteries and supercapacitors, and high-performance and corrosion-resistant materials.

Cardiac optical mapping has become an important fluorescent imaging technique in the study of the...

The instrument allows materials scientists to discover and design new materials and analyse their...