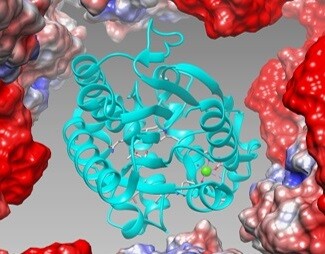 Researchers from The Chinese University of Hong Kong (CUHK) have developed a novel and cost-effective method for extracting enzymes from bacteria, improving the enzyme’s stability and opening up a new avenue for the enzymatic production of biodiesel — an eco-friendly and effective substitute for fossil fuels. Their findings have been published in the Journal of the American Chemical Society.

Enzymes are small microscopic engines that drive the various chemical processes needed for life. Chemists often generate tailor-made enzymes and use them to produce drugs and other useful chemicals that we use daily. One example is the enzymatic synthesis of biodiesel — an emerging renewable fuel commonly used in blends with petroleum diesel.

Biodiesel is typically produced from vegetable oil or animal fats and methanol in the presence of a base catalyst, but enzymes can also act as a catalyst to produce biodiesel. In fact, enzymes generate less waste and require lower temperatures than traditional base catalysts, and they can even convert waste sources such as used cooking oil directly into biodiesel, while base catalysis requires rigorous pretreatment resulting in water pollution.

Unfortunately, enzymes are currently too expensive to compete with base catalysts, as they require tedious purification procedures and subsequent immobilisation to be easily recycled and re-used. Professor Michael Chan and his team recently developed a novel method to overcome these hurdles — one that involves trapping enzymes in protein crystals produced naturally in bacteria, and then isolating these crystals in a single step. This greatly simplifies the isolation procedure.

A crystal is a solid material comprising atoms or molecules that are arranged in a structurally ordered way. Proteins can also organise themselves into crystals with various shapes and sizes. One special protein, Cry3Aa, directly forms crystals in the bacteria Bacillus thuringiensis. These Cry3Aa crystals contain large pores that are even big enough to accommodate enzymes.

Prof Chan’s team discovered that when an enzyme and the Cry3Aa protein were produced together in the same bacteria cell, the resulting crystals contained millions of copies of the enzyme trapped inside the pores. These crystals could be easily isolated and applied to produce biodiesel. They found that entrapment of this enzyme inside the Cry3Aa crystals made it much more stable, allowing it to be used in multiple cycles of biodiesel production from waste cooking oil.

“The real elegance of this technology is that the bacteria cells do all the hard work of producing the catalyst — all we have to do is separate the crystals from the cell debris,” said Dr Bradley Heater, the lead author of the paper. “Currently, we can use this method to produce an enzyme that converts waste cooking oil to biodiesel, but we should be able to trap other enzymes to perform different chemistry as well.”