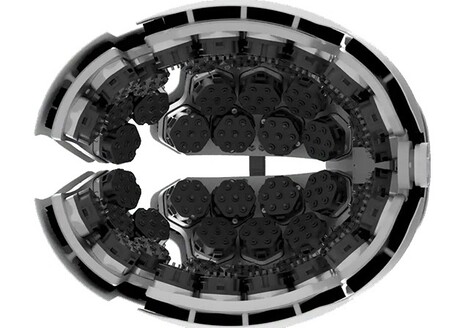 Researchers at neurotechnology company Kernel have developed a wearable headset that monitors brain activity. Described in the Journal of Biomedical Optics, the so-called ‘Kernel Flow’ device weighs 2.05 kg and contains 52 modules arranged in four plates that fit on either side of the head.

Recent advances in brain imaging techniques facilitate accurate, high-resolution observations of the brain and its functions. For example, functional near-infrared spectroscopy (fNIRS) is a widely used non-invasive imaging technique that employs near-infrared light (wavelength >700 nm) to determine the relative concentration of haemoglobin in the brain, via differences in the light absorption patterns of haemoglobin.

Most non-invasive brain scanning systems use continuous-wave fNIRS, where the tissue is irradiated by a constant stream of photons, but these systems cannot differentiate between scattered and absorbed photons. A recent advancement to this technique is time-domain (TD) fNIRS, which uses picosecond pulses of light and fast detectors to estimate photon scattering and absorption in tissues. However, such systems are expensive and complex and have a large form factor, limiting their widespread adoption.

To overcome these challenges, researchers developed the Kernel Flow wearable headset based on TD-fNIRS technology. The headset modules feature two laser sources that generate laser pulses less than 150 picoseconds wide. The photons are then reflected off a prism and combined in a source light pipe that directs the beam to the scalp. After passing through the scalp, the laser pulses are captured by six spring-loaded detector light pipes that are 2 mm in diameter and then transmitted to six hexagonally arranged detectors 10 mm away from the laser source. The detectors record the photon arrival times into histograms and are capable of handling high photon count rates (those exceeding 1 x 109 counts per second).

To demonstrate its performance, the Kernel Flow system was used to record the brain signals of two participants who performed a finger-tapping task. During the testing session, histograms from more than 2000 channels were collected from across the brain to measure the changes in the concentrations of oxyhemoglobin and deoxyhaemoglobin. The system was found to match conventional TD-fNIRS systems.

“We demonstrated a performance similar to benchtop systems with our miniaturised device as characterised by standardised tissue and optical phantom protocols for TD-fNIRS and human neuroscience results,” said Ryan Field, Chief Technology Officer at Kernel and corresponding author of the study.

Systems like Kernel Flow should thus make neuroimaging much more accessible, to enable widespread benefits in health and science. For instance, the US FDA recently authorised a study using the Kernel Flow system to measure the psychedelic effect of ketamine on the brain. That said, Field acknowledges the need for more testing as near-infrared light is absorbed differently by certain hair and skin types.

“We are currently collecting data with Kernel Flow to demonstrate additional human neuroscience applications,” he said. “We are also in the process of evaluating the performance of the system with different hair and skin types.”