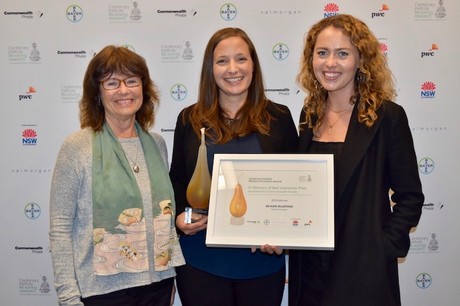 An Australian scientist who has developed a system which allows her to video mitochondria inside a cell has been named the winner of the In Memory of Neil Lawrence Prize at the 2018 Centenary Institute Medical Innovation Awards.

Dr Kate McArthur from Monash University used lattice light-sheet microscopy (LLSM) and genetically engineered a system that allowed her to document what exactly takes place during cell ‘suicide’ — a process fundamental to the human body’s development. The discovery could have practical implications for a wide range of inflammatory and autoimmune diseases, such as lupus and rheumatoid arthritis.

As winner of the In Memory of Neil Lawrence Prize, Dr McArthur has been awarded $30,000 from Centenary’s sponsor Commonwealth Private to support her ongoing research, as well as a perpetual Nick Mount hand-blown glass trophy.

“An award like this, particularly for early-career researchers, is unbelievable. It can be very difficult to get funding this early in your career. Awards like this help us convince the ‘big guys’ our ideas have merit, and that people are excited and interested in them,” Dr McArthur said.

Dr Yiqing Lu from Macquarie University has been awarded the $15,000 Bayer Innovation Award after finishing in second place for his development of a new imaging technology, powered by advanced nanoparticles. The discovery will allow researchers and clinicians to look at multiple disease biomarkers inside the body simultaneously, and is expected to reduce the pain, time and cost associated with disease diagnosis.

Dr Ana Janic from the Walter and Eliza Hall Institute has rounded off the finalists in third place and has been awarded the $10,000 Val Morgan Award. Dr Janic plans to use the funding to better understand how a particular protein known as p53 helps prevent cancer and, in turn, stimulate new approaches to therapy.

Separately, Dr Neil Bretana has been named the People’s Choice winner after receiving the highest number of online votes from the Australian public. Dr Bretana has developed a model that reflects the dynamics of chronic hepatitis C virus (HCV) in prisons, with the ultimate aim of eliminating the disease in vulnerable communities like these.