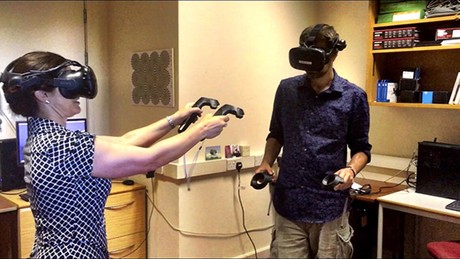 Writing doesn’t do justice to virtual reality. Nor does looking at an animated, 2D image do anything to convey the feeling of scuba diving through space, playing catch with molecules of buckminsterfullerene. Wearing off-the-shelf VR gear, I found it surprisingly addictive to tie knots in proteins or thread carbon nanotubes. But these VR journeys into the molecular level aren’t just fun — they reveal important details of how nature is built and behaves, and could hold keys to engineering nanosystems, combating antimicrobial resistance, and making progress to understand neurodegenerative disease.

I’m in an oatmeal-colored room with institutional furniture and an inconspicuous HTC Vive setup that comprise a VR laboratory at Bristol University. Dr David Glowacki, a Royal Society Research Fellow since 2013, fits me with a head-mounted display and a controller in each hand and lets me try various tasks that have important uses in natural and engineered nanosystems. I can switch the representation from a ball-and-stick model to electron clouds, or add trails so that as I crash molecules together I can poke my head into the comet tails they leave behind, assessing the finer details of their vibrational motion. Finally, I play catch with Glowacki when he joins me in the Tron-like simulated space, passing simulated molecules back and forth.

“Use the controllers to grab opposite sides of the molecule. Now try to feel the sort of yogic motion required to throw it toward me,” he says. After a few minutes, he praises me for my “chemical intuition” — meaning a gut-level feel for how this world works. We’re using the iMD (interactive molecular dynamics) VR version of Nano Simbox, created by the company Glowacki co-founded, Interactive Scientific (iSci), which lets anyone visit and play with the invisible molecular world. It turns out that this chemical intuition is something laypeople and scientists alike come by easily while using Nano Simbox’s immersive experience.

Glowacki’s team of researchers recently published a paper in Science Advances describing their experimentation with iMD VR to enable chemical intuition on detailed models, ones that react in real-time and deliver physics that accurately reflect the real dynamics of the nanoscale world. Glowacki hopes the publication of this paper will encourage thousands of new users to test the framework.

The reason this Nano Simbox VR experience can now be offered so widely — to high school students and laypeople and not just scientists at premier research institutions — is that the models now can run anywhere via cloud-based servers, rather than only via expensive, short-term workloads at high-performance computing centres. Nano Simbox runs on Oracle Cloud Infrastructure, which provides the low network latency and powerful computing that these scientific models require. “When the cloud architect we’d been working with at Oracle first approached me and said ‘You should try this in cloud,’ I thought it was a crazy idea. For that to be running in cloud, the network speeds have to be really fast,” Glowacki says. “But the fact that we can play catch with C60 molecules, among other things, shows that it works.”

Using a cloud platform also has other benefits, explains Phil Bates, the Bristol-based Oracle cloud architect who suggested Oracle Cloud Infrastructure to Glowacki and went on to become a coauthor of the Science Advances paper. Not only are deployment and collaboration more straightforward, targeting simulations to appropriate cloud infrastructure is a breeze. Bates says: “For example, while simulations of small molecules may use just a small number of cores, larger simulations can be targeted to Oracle superfast GPU instances, including Volta Bare Metal GPU instances with up to eight Nvidia V100 GPUs — a lot of processing horsepower.”

Having a sense of the invisible forces that cause charged particles to dance with each other is critical to understanding chemistry and designing nano-architectures, according to Glowacki and his coauthors. It seems esoteric enough until you realise how revolutionary physical models are in the history of chemistry and biochemistry. Dorothy Hodgkin’s crystallography confirmed the structure of penicillin in 1945 (and earned her the Nobel Prize), and Watson and Crick’s helical conception of DNA has become a meme. Computer simulations of molecular dynamics on screens started in the 1980s. But VR allows a new depth of understanding.

Glowacki holds up two plastic models of molecules. “The deficiency of these models is that you don’t understand anything about motion,” he says. “The entire world is constantly in motion, right?” The real power of the VR framework is that “you understand a whole new aspect about how they operate, how they behave, and how they would respond in nature.”

Multiperson VR does three things, according to Glowacki. First, it encourages undistracted presence, even for the iPhone-addicted. Second, it enables sensory experiences in domains that, being nanomolecular, are otherwise invisible and act completely differently from the objects humans are familiar with in day-to-day life. Third, it makes learning and research social, “sort of ‘group-trip’ sharing experiences that furnish detailed insight into complex phenomena,” he says. And thanks to the cloud-based model, those people don’t even have to be in the same physical room to share the experience.

Glowacki also thinks people learn better thanks to the ergonomic and what he calls “embodied cognition” aspects of VR: “What’s been really interesting observing my PhD students is, as they interact with this system, they’re engaging more of their body instead of being hunched over a computer.” Body engagement, in fact, was a precursor to the iMD VR idea. As a resident at Bristol’s Pervasive Media Studio, Glowacki led a group that designed a performance called Hidden Fields, which melded GPU-accelerated computational physics, computer vision technology, real-time processing, and dance.

If the publication of this scientific paper really does encourage thousands of new users to test the framework, iSci is ready. Using the scalability of Oracle Cloud Infrastructure, iSci can add computing capacity to meet rising demand (and cut it off if demand slackens). Users can download the framework and choose the Oracle data centre (Frankfurt, Germany; Phoenix, Arizona; Ashburn, Virginia) nearest to them for minimal network latency.

Interactive Scientific is part of Oracle’s Startup Cloud Accelerator program, which provides free access to Oracle’s cloud technology, expertise and customer network. Unlike many accelerators, Oracle doesn’t take an equity stake for startups to take part. The Bristol University research was supported with a $75,000 grant from Oracle’s Startup for Higher Education, which supports research across a range of computationally and data-intensive domains (everything from astrophysics to synthetic biology and digital health) and helps university ventures bring their products to market.

Glowacki’s vision is to unleash VR to give people a much richer understanding of science, whether it’s a high school student just starting to learn chemistry or a researcher trying to cure a disease.

“I’m hoping that the paper inspires people who are interested in VR for non-gaming applications will try out what we’ve done,” he says.

*Alexa Weber Morales is a content strategist and editor for Oracle.