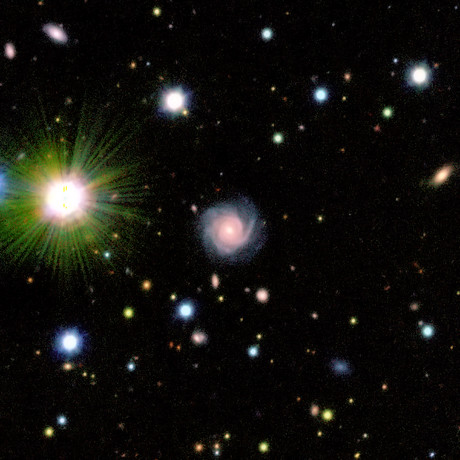 Scientists from the University of Western Australia node of the International Centre for Radio Astronomy Research (ICRAR) have launched the AstroQuest citizen science project, which seeks volunteers to study images of galaxies and figure out which light is coming from which galaxy.

ICRAR Astrophysicist Dr Luke Davies helps lead the Wide Area Vista ExtraGalactic Survey (WAVES), a million-dollar international project and believed to be the biggest spectroscopic galaxy evolution survey ever undertaken. He said WAVES needs to accurately measure the light coming from millions of galaxies; this can tell us things like how many stars the galaxy currently has, how many stars it is forming and how much dust is in it.

“We use sophisticated computer algorithms to make sense of where the light is coming from in these crowded regions, but the computer often gets it wrong. It’s simply no match for the human eye and brain.”

Dr Davies said professional astronomers have previously looked through the galaxies and fixed the computer’s mistakes, but there are simply not enough to continue to do so. AstroQuest is therefore looking for volunteers to take over from astronomers and check the computer’s work, said ICRAR Citizen Science Project Officer Lisa Evans.

“There’s never been a citizen science project quite like this before,” Evans said. “This is the first time we’ve got people actually painting over the galaxies and drawing in where they are.”

An image of an AstroQuest galaxy alongside how it looks in the AstroQuest platform once a citizen scientist has helped the computer to identify what belongs to the main galaxy and what doesn’t. Image credit: ICRAR/AstroQuest.

AstroQuest has been described as one of the biggest astronomy projects of the next 10 years, and includes game features such as leaderboards, quests and achievements. To register as a volunteer, visit www.astroquest.net.au.

Top image caption: An enhanced image of some of the galaxies from AstroQuest.