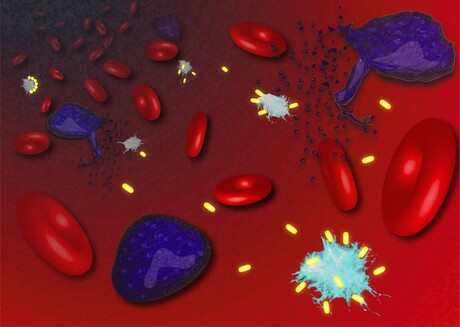 Researchers at the Universities of Bonn and São Paulo have succeeded in mitigating chronic inflammation in mice using customised ‘mini antibodies’, which enabled them to dissolve molecular complexes in tissue that normally activates the immune system. The team’s results, published in the journal EMBO Molecular Medicine, indicate that these ‘nanobodies’ may in future help to slow down unwanted inflammatory reactions that cause diseases such as arthritis or neurodegeneration.

The cells in our body have a sophisticated alarm system known as the inflammasome, the central component of which is the ASC protein. In the event of danger, such as an attack by a pathogen, many of these molecules join together to form a large complex known as an ASC speck. This ensures two things. First, its activity causes the cell to accumulate large quantities of messenger substances, which can be used to summon the help of the immune system. Second, numerous pores are formed in the cell membrane through which these alarm molecules can reach the outside and fulfil their task. These holes ultimately lead to the demise of the cell.

“At some point, the cell basically explodes and empties its entire contents into the tissue,” said Prof Dr Bernardo Franklin from Bonn’s Institute of Innate Immunity. “The messenger substances that are now abruptly released then act like a last great cry for help. This triggers the immune system to mount a strong inflammatory response that contains the infection.”

This is why this mechanism of innate immune defence is hugely important. However, in this process, ASC specks also accumulate in the tissue and may persist there for a long time.

“We have now been able to show in mice that their activity activates the immune system even after the threat has been averted,” Franklin said. “This can result in chronic inflammation, which severely damages the tissue.”

Together with researchers from the University of São Paulo, Franklin’s team has succeeded in preventing this undesirable effect. They used so-called nanobodies for this purpose — antibody fragments with a very simple structure.

“In collaboration with Prof Dr Florian Schmidt from the Institute of Innate Immunity, we generated nanobodies that specifically target ASC and can dissolve the specks,” said Bonn’s Dr Damien Bertheloot.

The researchers got help from an alpaca, injecting the animal with the ASC protein so that it developed matching antibodies. Some of the alpaca antibodies have a very simple structure, which makes it possible to produce and test fragments of these antibodies as so-called nanobodies. The researchers were able to obtain the genetic information for the ASC nanobodies from blood samples of the animal using a complex technique.

“We then incorporated this genetic make-up into bacteria so that we could have them produce the nanobody in large quantities,” Bertheloot said. The team demonstrated that the compound can dissolve ASC specks using human cell cultures as well as mice.

“The mice in our experiments have rheumatoid and gout-like symptoms,” Bertheloot said. “After administration of the nanobody, the inflammation and also the general health of the rodents improved significantly.”

Nanobodies are very small compared to normal antibodies. They are therefore excellent for breaking up such molecular complexes, because they can still reach sites that would be too cramped for large agents. Moreover, normal antibodies provide additional stimulation to the immune system and can therefore exacerbate inflammation — a property that nanobodies lack.

The results are also interesting for another reason. Studies indicate that ASC specks can cause significant damage to the brain, where they seem to serve as a kind of ‘crystallisation nucleus’ for the Aß protein. In the brains of Alzheimer’s patients, Aß clumps together to form large protein complexes called plaques. Presumably, ASC specks can trigger this clumping.

“So perhaps it’s possible to slow down this process with the help of our nanobodies,” Franklin said. “We now plan to investigate this possibility in a follow-up study.”

Scientists have developed a silver-based coating that can easily be applied to devices such as...

The super-hygroscopic material enhances sweat evaporation within a personal protective suit, to...

Researchers have developed a new theoretical model to better assess the risks of spreading...