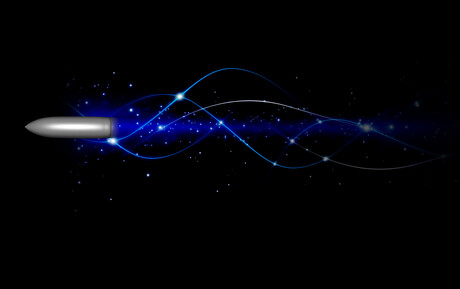 According to folklore, silver bullets kill werewolves, but in the real world, researchers want to harness this metal to fight another deadly foe: bacteria.

Scientists have previously tried to develop a silver coating for implantable medical devices to protect against infection, but they’ve had limited success. Now, researchers from The University of British Columbia (UBC) and the Vancouver Coastal Health Research Institute have developed a silver-based coating that can easily be applied to devices such as catheters and stents. Their novel formulation, discovered by screening dozens of chemical components, overcomes the complications of silver that have challenged scientists for years.

Sometimes medical care requires surgeons to implant a device, such as a tube to drain a wound or the bladder, or to deliver medication directly into the blood. However, bacteria can attach to and collect on the surfaces of these devices, creating a risk for dangerous infections. Urinary tract infections from catheters, for example, are among the most common hospital-acquired infections.

Coating these devices in silver has long been viewed as a potential solution because of its ability to kill bacteria, but its use on implanted devices poses several challenges that have stumped researchers until now. Silver can also be toxic to human cells as well as to bacteria, and it’s difficult to make a coating that continually releases small amounts of the metal over long periods. Coatings incorporating silver have also proven overly complicated to make, lacked durability, became easily gummed up with proteins or crystals, or simply didn’t adhere well to the surface of devices and implants.

The UBC team, led by Dr Hossein Yazdani-Ahmadabadi, wanted to identify a formula that could overcome these and other difficulties. To develop a simple-to-use coating, they screened many sets of ingredients that they could apply to a surface in a single step. The formula that worked the best included silver nitrate, dopamine and two hydrophilic polymers.

The silver-based film-forming antibacterial engineered (SAFE) coating formed stable, silver-containing assemblies, which in lab tests gradually released silver ions in small, controlled quantities — enough to kill bacteria but not enough to harm human cells. It also maintains its killing activity for longer than has been achieved by other coatings. The results were described in the journal ACS Central Science.

When exposed over 28 days to eight of the most common species of bacteria that cause serious infections, this new coating recipe effectively kept the microbes at bay. It did so in a unique way: by repelling the bacteria from the surface and then killing them with the silver ions. Indeed, it repelled both live and dead bacteria as well as other fouling agents from its surface, keeping it clean.

To test SAFE’s effectiveness in a living animal, the team coated a titanium implant with it, then placed the implant beneath the skin of rats. After a week, the researchers found that implants with the coating had dramatically fewer bacteria than those without it. In addition, there were no signs of toxicity to the rats’ tissues. 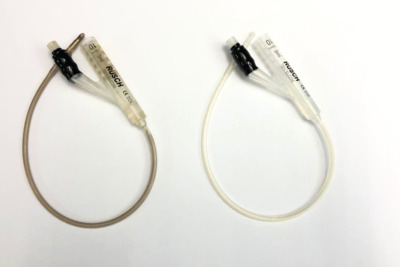 Photo of a coated versus an uncoated catheter. Image credit: Kizhakkedathu Lab.

The coating also appeared tough, showing little wear and tear after being rubbed and sterilised using harsh conditions. This combination of attributes is likely to make the coating useful in many types of medical devices and implants to prevent bacterial infection over the long term, the researchers said.

“Other silver-based coatings rely on contact killing, meaning the bacteria have to attach to the material in order to be exposed to the silver and die. This results in dead bacteria building up on the surface over time and rendering the device ineffective,” said co-senior author Dr Dirk Lange, an associate professor at UBC and Director of Basic Science Research at the Stone Centre at Vancouver General Hospital.

“We’re preventing that by keeping bacteria off the surface in the first place, and then killing them with the release of silver. Since we prevent attachment of both live and dead bacteria, this coating has significant potential to maintain a clean surface for any device or material for an extended period of time, which is something we haven’t seen so far.”

The coating could be applied to almost any material used to make medical devices such as central venous catheters, urethral catheters, peritoneal catheters, feeding tubes, vascular grafts, ureteral stents or orthopaedic implants, without requiring pre-treatment. And while silver is a precious metal, the amount required is so small that it would add only about 50 cents to the cost of a catheter.

The research team looks forward to seeing how the coating performs in clinical trials, and is optimistic that their discovery could be in wide use to prevent infections in patients within the next decade.

“This is a highly effective coating that won’t harm human tissues and could potentially eliminate implant-associated infections,” said UBC’s Dr Jayachandran Kizhakkedathu, co-senior author of the study. “It could be very cost-effective and could also be applicable to many different products.”

Normal antibodies provide additional stimulation to the immune system and can therefore...

The super-hygroscopic material enhances sweat evaporation within a personal protective suit, to...

Researchers have developed a new theoretical model to better assess the risks of spreading...