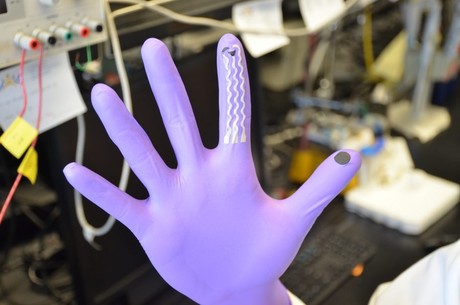 CSIRO researchers, in collaboration with the University of California, San Diego (UCSD), have designed ‘lab-on-a-glove’. The  wearable, flexible glove biosensor can detect the presence of dangerous organophosphate (OP) compounds on surfaces and agricultural products.

OP compounds are a group of toxic phosphorus-containing organic chemicals that can be found in nerve agents like sarin, and some pesticides. They work by attacking the nervous systems of humans and insects. Detecting these compounds accurately and quickly could help improve both defence and food security measures.

The new wearable device carries out the sampling and electrochemical biosensing steps on different fingers, with the thumb finger used for collecting the nerve-agent residues and an enzyme immobilised on the index finger. The report on the glove appears in the journal ACS Sensors.

The researchers created stretchable inks to print the collection and sensing elements on these fingers. Detection of the collected residues is performed when the thumb touches the printed enzyme-based organophosphate biosensor on the glove index finger. So, a user would swipe the thumb of the glove on a surface for testing, then touch the thumb and index fingers together for the electrochemical analysis. For real-time results, the voltammetric data are sent via a re-usable Bluetooth device on the back of the glove to a user’s mobile device. Testing showed that the glove could detect organophosphate pesticides methyl parathion and methyl paraoxon on various surfaces — including glass, wood and plastic — and on produce.

The researchers said the sensor could be used in both security and food safety settings. The team is now focusing on further miniaturising the electronics and developing new sensors that can screen for other target compounds.

This work was supported by the Defense Threat Reduction Agency Joint Science and Technology Office for Chemical and Biological Defense.

The device serves as a physical shield to reduce the risk of exposure to pathogens for healthcare...

Scientists have developed a sustainable way to extract an antimicrobial compound from seeds...

Antibodies for potential use as medicines can be made rapidly in chicken cells grown in...