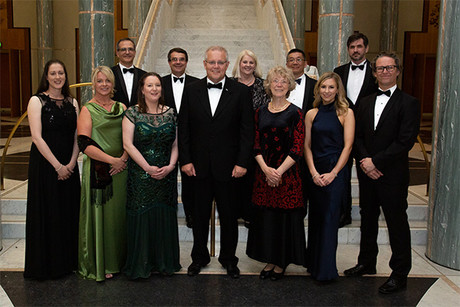 The Australian scientific, research and science teaching community recently came together to recognise some of the country’s leading scientists and science educators at a black-tie awards dinner celebrating the 2019 Prime Minister’s Prizes for Science.

The Prime Minister’s Prizes for Science are said to be Australia’s most prestigious awards for outstanding achievements in scientific research, research-based innovation and excellence in science, mathematics or technology teaching. A total of up to $750,000 in prize money is awarded each year, with each prize recipient also receiving a medallion, lapel pin and award certificate.

Held at Parliament House on 16 October, the 20th edition of the prizes was hosted by renowned astronomer Professor Alan Duffy and saw Prime Minister Scott Morrison and Minister for Industry, Science and Technology Karen Andrews present awards across seven categories, in front of an audience of 500 guests. The winners were as follows.

Australia’s Chief Scientist, Dr Alan Finkel, has applauded the breadth of scientific endeavour recognised in the 2019 awards, celebrating achievements across the full spectrum of science, technology, engineering and mathematics (STEM).

“The S in STEM is science — but it’s often impossible to disentangle new scientific breakthroughs from the T, E and M that make them possible,” Dr Finkel said.

“Where would our new anticancer drugs be, without the rigorous scientific trials to prove their effectiveness? How do you program self-adapting headphones to improve your hearing, without technology and engineering to make them tangible? Or the complex mathematics of group theory, central to secure banking, digital signatures and secure internet communication?

“From the development of breakthrough molecular imaging tools and the discovery of new immune cells: the winners of this year’s Prime Minister’s Prizes for Science showcase the multidisciplinary nature of science today.

“As the Chair of the Judging Committee, it’s been my privilege and challenge to see so many wonderful examples of great Australian science. I thank the members of the committee for their tireless efforts in considering the truly exceptional Australian scientists and innovators nominated for this year’s awards.”