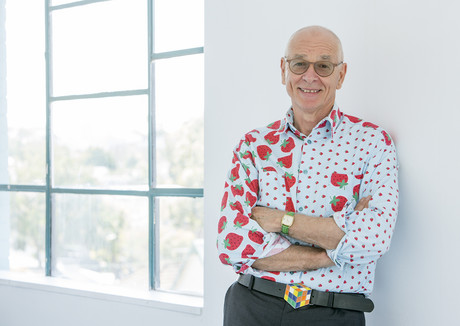 Dr Karl Kruszelnicki has become the first ever Australian to receive UNESCO’s Kalinga Prize for the Popularisation of Science, thus joining the ranks of laureates such as Sir David Attenborough, Arthur C Clarke, Margaret Mead and David Suzuki.

Founded in 1951, the Kalinga Prize is the oldest prize of the United Nations Educational, Scientific and Cultural Organization (UNESCO). It rewards exceptional contributions made by individuals in communicating science to society and promoting the popularisation of science; the inaugural winner was Louis de Broglie, one of the founders of quantum theory.

Dr Kruszelnicki, popularly known as Dr Karl, was recognised for his longstanding commitment to fire up people’s curiosity for science and share his passion for the subject across the media, including in television, radio, podcasts, print media, books and social media. He is certainly well educated in the sector, having earned degrees in mathematics and physics, biomedical engineering, medicine and surgery — and he also studied electrical engineering, astrophysics, computer science and philosophy, and once applied (unsuccessfully) to be an astronaut with NASA.

In 1981, Dr Kruszelnicki started presenting Great Moments in Science on ABC radio station 2JJ to pay his way through medical school and has subsequently worked across many programs on the public broadcaster, including ABC TV’s Quantum and Sleek Geeks. Since 1995 he has been the Julius Sumner Miller Fellow in the School of Physics at the University of Sydney, but he has also worked as a physicist, engineer, car mechanic, labourer, filmmaker, roadie for Slim Dusty, T-shirt manufacturer, taxi driver, TV weatherman and doctor in a children’s hospital.

He has written 45 science books, with the latest — Dr Karl’s Random Road Trip Through Science — being one of the first books embedded with augmented reality, including a pop-up video of an asteroid as it skims past the Earth. He holds weekly Q&A sessions with schools around the world, and each week hosts a science talkback show on ABC Radio and BBC Radio. In February 2019, he carried out the first series of talkback radio from Antarctica — across two weeks, not one, because he was trapped there by a blizzard.

Dr Kruszelnicki’s accolades range from being named a National Living Treasure (2012) and Member of the Order of Australia (2006) to winning an Ig Nobel Prize for his research into belly button fluff and why it is almost always blue (2002). In 2012 he was delighted to have Asteroid 18412 named after him: Asteroid Dr Karl/18412.

Now Dr Kruszelnicki has been awarded the Kalinga Prize — the first Australian to do so — as well as the UNESCO Albert Einstein medal, in a ceremony held at the 2019 World Science Forum in Budapest, Hungary.

“Firstly, I’m incredibly honoured to be awarded the UNESCO Kalinga Prize for the Popularisation of Science,” Dr Kruszelnicki said. “Secondly, I couldn’t have done it without an incredible amount of nurturing and training by so many people at the ABC, who over the last three decades have helped me along this pathway. Science is important because it is a tool that can help you not get fooled. And I’m very happy to be in a position where I can bring critical thinking into the daily lives of people.”

Ollie Wards, Manager of triple j, said: “triple j is stoked to see Dr Karl awarded such a prestigious prize for popularising science. We’re stoked but not surprised. Every week, Dr Karl brings science to young people all over Australia, answering listeners’ questions from ‘How big are black holes?’ to ‘Why do guys have nipples?’ He makes colourful shirts, science and knowing stuff popular! Check with Dr Karl but we reckon he’s the scientific definition of a living legend.”

The Nikon Small World Photomicrography Competition serves as a leading showcase for...

The Australian scientific, research and science teaching community recently came together to...

Described as Australia's leading science awards, the prizes saw trophies and $170,000 in...