Science meets Parliament 2018 the largest yet 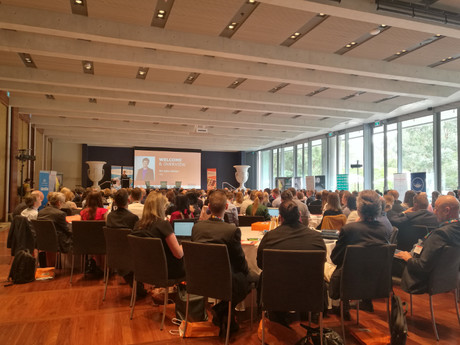 The 20th annual Science meets Parliament was attended over the past two days in record-breaking numbers, bringing more than 240 Australian scientists to Canberra for a chance to meet with parliamentarians from across the political spectrum.

The annual event brings STEM professionals to Parliament House for a series of workshops, forums and private meetings with parliamentarians. Attendees this year included scientists and technologists working in a range of scientific and technological fields, on projects such as self-healing concrete; helping endangered wildlife to reproduce; finding genes to suppress the growth of tumours; and much more.

The event kicked off on 13 February at the National Gallery of Australia, with attendees hearing from STEM leaders including Australia’s Chief Scientist Dr Alan Finkel, CSIRO Chief Executive Dr Larry Marshall and Universities Australia Deputy Chief Executive Catriona Jackson. Dr Finkel’s opening speech spoke on the “state of the union” of science and parliament, emphasising four points to remember for the relationship:

In the afternoon, delegates were treated to a fast-paced pitching workshop run by Professor Joan Leach and Dr Will Grant from the Australian National Centre for the Public Awareness of Science, as well as an energetic networking session led by Dr Alan Duffy and Dr Zoe Doubleday.

Dr Marshall meanwhile gave advice not only useful for networking meetings, but for a lifetime of engagement with science and policy.

Day one concluded with a gala dinner that saw keynote speaker Michaelia Cash, Minister for Jobs and Innovation, highlight the Australian Government’s continued commitment to science and innovation, including joint efforts with the science community to boost the participation of girls and women in STEM education and careers.

“As the Cabinet Minister responsible for science I’m delighted to be part of this strong tradition of fostering understanding between parliamentarians, scientists and technologists,” said Minister Cash, who described Science meets Parliament as “a highlight of the parliamentary calendar”.

“Science and innovation create the jobs of the future — it’s imperative we work together to harness the power of science to support Australian industry, jobs and our continuing prosperity.

“We are also helping Australians maintain and increase skills necessary for the jobs of tomorrow, and ensure our young women are inspired to aim high in STEM careers.”

Day two saw attendees relocate to the Parliamentary Theatre for meetings with Members of Parliament and senators, as well as the delivery of the National Press Club Address by Science & Technology Australia President Professor Emma Johnston. The address was televised nationally, and called for the celebration of an Australian cultural identity that had science and technology at its core.

The speech referred to a national Galaxy poll which found that a whopping 94% of Australians think that science and technology is important to their health and wellbeing, while 70% believe that Australian science has made their life better.

“Australians love science and technology and recognise it as the solutions sector, but there is so much more that can be done to support its success in Australia,” Professor Johnston said. She claimed there is “a lack of strategic leadership for science” and that public investment is falling, with many STEM professionals feeling insecure in their jobs.

“Science and technology skills are increasingly important and Australia’s falling enrolments and average results in STEM subjects are leaving us unprepared as a nation.”

As the national representative for STEM professionals, Professor Johnston offered some advice: “If Australia is to survive this accelerating pace of change and remain a strong, independent and connected country, we need to sit in the driver’s seat — and that is a STEM seat.

“We need a long-term, whole-of-government plan to invest publicly in the fundamental research that fuels innovation. Let’s invest in the most renewable resource — the creation of knowledge — to build a healthy community, thriving economy and skilled future workforce.”

“We have a record number of scientists this year, all eager to work with federal MPs and senators to demonstrate how their work can positively impact the lives of all Australians,” Walker said.

“Policy decisions based in evidence and informed by scientific research are important for our nation, and a lot of our MPs and senators show they understand that through their participation in Science meets Parliament.”