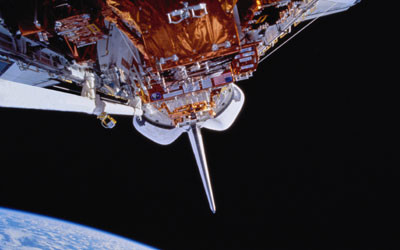 Australian Prime Minister Scott Morrison has used his latest visit to Washington to announce a series of Australia–US bilateral science and technology initiatives — most significantly, a $150 million investment into local Australian businesses, researchers and technologies that will support NASA in its campaign to return to the Moon and travel to Mars.

The five-year investment will see the Australian Space Agency foster the new ideas and high-tech skilled jobs that should make Australian businesses a partner of choice to fit out NASA missions. The agency will work closely with NASA to identify how they can best support their missions after the signing of a joint statement of intent on expanding cooperation.

The investment means Australian businesses and researchers will have the opportunity to showcase their knowledge and capabilities in projects that can support NASA’s Moon to Mars mission, and should support Australian businesses to become more competitive in international space supply chains and to increase Australia’s share in the global space market.

The Prime Minister said the investment will benefit all Australians, with more jobs, new technologies and more investment in businesses that will grow the economy.

“We’re backing Australian businesses to the moon, and even Mars, and back,” he said.

“We’re getting behind Australian businesses so they can take advantage of the pipeline of work NASA has committed to.

“There is enormous opportunity for Australia’s space sector, which is why we want to triple its size to $12 billion to create around 20,000 extra jobs by 2030.

“We’ve partnered with the US in almost all of their missions to space for the last 60 years and this investment paves the way for the next 60. The growing amount of space sector work and innovation will also inspire the next generation to see the future of a career in these fields for the long term.

“The historic commitment continues an already strong alliance and enduring friendship between the US and Australia.”

Minister for Industry, Science and Technology Karen Andrews said this was a milestone moment for the booming Australian space industry, but would also benefit everyday Australians.

“This agreement is all about opportunity, for us to take the Australian space sector to the next level, grow our economy and create new local jobs,” Andrews said.

“Space also drives technology which has a profound and everyday impact on the lives of Australians — from disaster management, to helping farmers better manage their land and predict drought, through to improving GPS.

“That’s why as a government we established the Australian Space Agency just over 12 months ago and are investing strongly.”

The initiative has been welcomed by Professor John Shine, President of the Australian Academy of Science. He said, “The government’s space investment builds on a long history of cooperation between Australia and the US in space missions and will have a lasting impact on the growing space industry and workforce in Australia.”

The government has also announced greater cooperation with the US on a number of other cutting-edge science and technology issues — including holding a joint senior level dialogue to further collaboration on frontier technologies central to the national interest and security. The academy applauded a number of these science-related initiatives, including:

“The bilateral agreements between Australia and the US provide opportunities for Australian scientists to contribute their expertise to a number of issues of global importance, where science will be critical to finding environmental and technology solutions,” Prof Shine said.

“The announcements are a reminder of the importance science plays as a soft power asset in international engagement.”