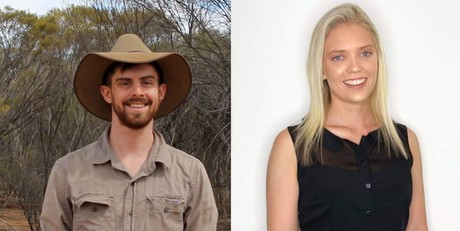 Dr Tim Doherty from Deakin University and PhD student Nicole Foster from the University of Adelaide have been awarded the 2019 Australian Academy of Science Max Day Environmental Science Fellowship Award.

The award provides up to $20,000 for early-career researchers working on the conservation of Australia’s flora and fauna, the ecologically sustainable use of resources and the protection of the environment and ecosystem services.

Dr Doherty will use the award to study the environmental consequences of removing the predators of the large native Australian monitor lizard, Varanus gouldii. Also known as the racehorse or sand goanna, it can cover up to 20 km/hour. The research will be conducted at Wild Deserts — a fauna reconstruction project at Sturt National Park in north-west New South Wales. Two 20 km2 fenced enclosures have been constructed from which introduced cats and foxes will be eradicated by early 2019.

“We will obtain baseline data on goannas inside the fenced predator-free ecosystem before ecosystem changes accumulate such as increased plant growth, the reintroduction of threatened mammals and changes in invertebrate communities,” Doherty said. “The project will determine how sand goannas change their movement behaviour and habitat use in response to the removal of mammalian predators, and also produce new knowledge on the ecological outcomes of erecting predator-free enclosures in Australia.”

“Mangroves, salt marshes and sea grasses capture large amounts of carbon from the atmosphere and this actually helps to prevent global warming. They also provide a large amount of habitat for marine life and birds and stabilise the coastlines against erosion and storm events,” Foster said.

“Through this environmental DNA analysis we will be able to see what the natural state of this system is and then tailor conservation goals towards the natural environment.”

The award is named in honour of Academy Fellow, the late Dr Maxwell Frank Cooper Day AO, who spent a lifetime championing entomology, conservation and forestry, as well as helping other scientists. He died last year aged 101.

Manufacturing contraction eases in May