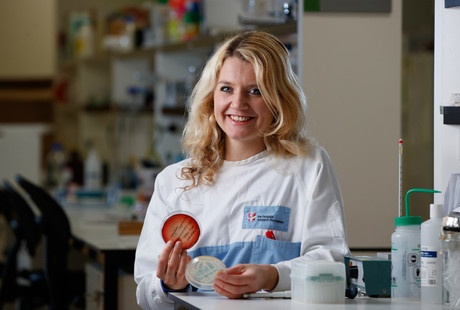 MIT Technology Review has announced the winners of its Innovators Under 35 Asia Pacific competition for 2019, honouring 10 brilliant young minds from the region. And this year, there were four Australians among the winners.

The first treatment is a nasal rinse applied after surgery destroying residual bacteria that can cause recurring infections, ongoing ill health and the need for further surgery. The second is a non-toxic wound-healing gel, also applied after surgery, which first starves bacteria and then feeds them the bacterial equivalent of toxic chocolate that the antibiotic-resistant bacteria find irresistible.

“With a current focus on chronic respiratory tract infections, my treatments have the potential to improve the lives of three million Australians — everyone from children to the elderly — who suffer from chronic sinus infections,” Dr Richter said.

“The treatments could effectively kill the superbugs, reducing the need to take antibiotics and preventing surgery which, up to now, have been the only methods of treating this debilitating condition.”

University of Adelaide alumnus Dr Jonathan Hall, director and co-founder of Life Whisperer, has also been recognised in the awards. Life Whisperer, based at the university’s ThincLab venture incubator, has developed an AI-driven, cloud-based image analysis system to improve the selection of viable embryos for IVF implantation. Trials showed selection performance improvement of 50% and can identify genetic disorders such as Down syndrome.

Fellow awardee Wenyue Zou, a postdoctoral researcher at RMIT University and co-founder of NexGen NanoSensors, was meanwhile recognised for focusing on the innovative use of light-active materials to make colour-based sensors. She has developed and patented a personalised wearable UV sensor technology that allows real-time monitoring of sun exposure for people with different skin colours.

The final Australian awardee is quantum physicist Nana Liu, an alumnus of the University of Melbourne who studied her PhD at the University of Oxford and is now based at the John Hopcroft Center for Computer Science, Shanghai Jiao Tong University. Her focus is on employing quantum resources for both quantum computation and quantum sensing. Her research lies at the interface between quantum computing, security and machine learning, which will be useful in building a future quantum internet.

The 10 innovators will receive tribute at MIT Technology Review’s 2019 EmTech Asia conference, which will be held from 22–23 January at the Marina Bay Sands Expo and Convention Centre, Singapore. There, the award winners will have the opportunity to present their research to some of the world’s most influential leaders and innovators.

The full list of Asia Pacific innovators can be found at https://www.innovatorsunder35.com/the-list/2019/asia-pacific.