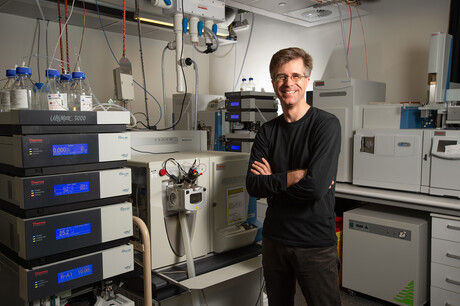 Twenty researchers from around Australia have been recognised by the Australian Academy of Science, receiving prestigious honorific awards for their contributions to the advancement of science at the early, mid and career level.

The awarded research covers subjects including the use of gas-eating microorganisms to make sustainable animal foods, understanding how our wetlands respond to a changing climate, revealing serious complications in carbon capture and how genetics can influence our choice in partners.

Professor Steve Simpson receives the Macfarlane Burnet Medal and Lecture — one of the Academy’s top awards — for his revolutionary research into locust swarming, spanning all the way from the brains of individual locusts to continental-scale migration patterns. This work led to a groundbreaking framework for nutrition research which has since been applied to a wide range of organisms and used to tackle problems from aquaculture and conservation biology to the dietary effects on obesity and ageing.

Professor Andrew Roberts, the recipient of the 2022 Mawson Medal and Lecture, is recognised for his fundamental contributions to paleomagnetism, allowing scientists to use the geological record to reconstruct global plate tectonic movements and to understand variations in Earth’s magnetic field through its history. His research, using environmental magnetism to understand climate change, has led to significant understanding of African monsoon dynamics, sea level variations, and Arctic and Antarctic glacial history.

Professor Christopher Barner-Kowollik, winner of the David Craig Medal and Lecture, is a soft matter nanotechnologist whose career is focused on the power and possibilities of light in materials science. His main body of work exploits light as a ‘molecular surgical tool’, where its colour and intensity are finely adjustable gates to ‘operate’ on the molecular structure of materials with high levels of precision. He has also recently been named the recipient of the 2022 European Polymer Federation Prize, Europe’s highest honour in polymer science, which will be awarded to him in Prague later this year.

Other highlights include Professor Rebecca Guy, a mid-career researcher, who receives the Gustav Nossal Medal for Global Health for her public health work for vulnerable and remote communities, such as point-of-care testing for STIs and COVID-19 and HIV self-tests that can be done at home; and early-career researcher Associate Professor Jenny Fisher, who receives the Anton Hales Medal for her research into how trace gases such as mercury and other pollutants are transported and distributed through the atmosphere, which informs the management of air pollution as well as climate modelling.

Academy President Professor John Shine said this year’s awardees are blazing a trail for science both locally and globally, making an impact that will be felt for years to come.

“They have distinguished themselves and the whole of Australian science, and the Academy is proud to support their outstanding contributions,” he said.

The full list of awardees, available to view here, will be formally acknowledged at the Academy’s event Science at the Shine Dome event in November. The Academy has also opened nominations for its 2023 honorific awards, research conferences, research awards and travelling fellowships, which can be made here.