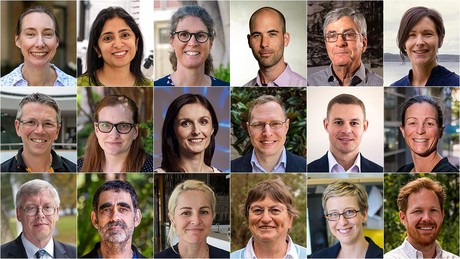 The Australian Academy of Science has presented its prestigious 2020 honorific awards to 18 different researchers for their outstanding contributions to science.

The scientists’ discoveries cross the breadth of research including new screening approaches to catch the early signs of dementia; the differences between land-based and seafloor volcanic eruptions; and engineering solutions for the complex challenges associated with offshore oil, gas and renewable energy infrastructure.

Professor Allen Nutman from the University of Wollongong has been awarded one of the Academy’s top career honours, the Mawson Medal and Lecture. He’s considered one of the leaders in understanding the evolution of early Earth and his techniques have radically reshaped our understanding of Greenland’s geology.

Professor Nicole Bell from the University of Melbourne is meanwhile one of two recipients of the Nancy Millis Medal for Women in Science. A mid-career researcher and theoretical physicist, Prof Bell’s work focuses on formulating a mathematical description of dark matter.

“We have incredibly precise theories that describe 5% of the universe but the rest of it is unknown,” Prof Bell said. “In some sense the search for dark matter is a needle in a haystack challenge, but we’ve got more experimental tools than ever before to find that needle.”

Early-career researcher Associate Professor Marina Pajic from the Garvan Institute of Medical Research and UNSW Sydney is the recipient of the Ruth Stephens Gani Medal, having spent the past decade trying to understand the genetic complexities of pancreatic cancer.

Assoc Prof Pajic’s work centres on identifying the genomic mechanism behind treatment failure and developing new personalised treatments for the disease. Her team has shown some tumours are characterised by specific genetic signatures that may respond to agents already being used to fight some other cancers.

The majority of the honorific awards will be presented at the Academy’s annual celebration of science, Science at the Shine Dome, on 28 May 2020. The full list of awardees can be found here.

Nominations have meanwhile opened for the Academy’s 2021 honorific awards, research conferences, research awards and travelling fellowships. These awards and funding opportunities are designed to shine a light on researchers who are making outstanding contributions to science and progressing the advancement of science in Australia, recognising achievements in fields including Earth sciences, biology, physics, mathematics, chemistry, experimental biomedicine, genetics and more.

The Academy is seeking nominations of outstanding scientists from all career stages, backgrounds and genders, and strongly encourages more nominations of women for all awards, in particular the career and mid-career honorific awards. In fact, two new career awards — the Ruby Payne-Scott Medal and Lecture and the Suzanne Cory Medal — will honour two of Australia’s pioneering women scientists.

The closing date for honorific award nominations is 1 May 2020; the closing date to apply for research conferences, research awards and travelling fellowships is 1 June 2020. For more information, click here.

Finally, the Academy is inviting applications from Australian researchers for the APEC Science Prize for Innovation, Research and Education (ASPIRE Prize) for 2020.

The ASPIRE Prize is an annual award, valued at US$25,000, that recognises young scientists from APEC economies who have demonstrated a commitment to both excellence in scientific research, as evidenced by scholarly publication, and cooperation with scientists from other APEC member economies. The theme chosen for 2020 is ‘Biodiversity for a Prosperous Economy’, focused on scientists’ contributions to biodiversity for prosperous economies across the APEC region by driving research that contributes to local livelihoods, traditional and modern medicines, and economic development.

Each member economy, through its representative on the APEC Policy Partnership on Science, Technology and Innovation (PPSTI), is invited to nominate one young scientist under the age of 40 (at 31 December 2020) to be considered for the 2020 ASPIRE Prize. The Australian Government and the Australian Academy of Science are running a national competition to select three Australian finalists; the winner of that competition will be nominated for the ASPIRE Prize, which will be presented at an awards ceremony during the 16th APEC PPSTI meeting in Malaysia tentatively scheduled for August 2020.

The deadline to nominate for the national competition is 24 April 2020. For more information and to apply, click here.

ISO 22367 specifies a process for a medical laboratory to identify and manage the risk to...

Research Excellence Awards are awarded each year to top-ranked researchers and teams following...