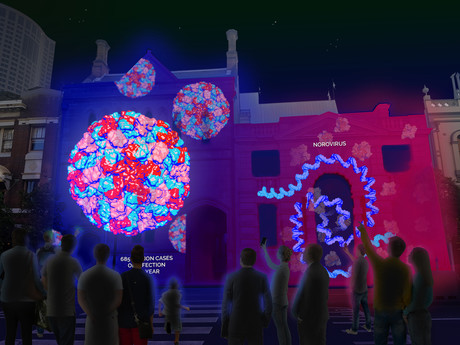 Deadly bacteria and viruses may not be the first thing you’d associate with Sydney’s annual festival of light, but according to CSIRO scientists, the sight of them is really quite spectacular.

As part of Vivid Sydney 2018, light projections of infectious biological agents that most affect human health — including Ebola, Zika and influenza — will be expanded up to a billion times in size and beamed onto buildings in The Rocks. The display aims to showcase how animating viruses and studying them up close is one way in which scientists are working to understand them, with a view to developing treatments or preventative vaccines.

“We want visitors to Vivid Sydney to be wowed by the visual beauty of coming face to face with some of the world’s most deadly viruses and diseases and be reassured that Australian scientists are playing a leading international role in their prevention, detection and treatment,” said CSIRO Health and Biosecurity Director Rob Grenfell.

“Some of the world’s most important science happens in secure laboratory environments, so it’s a rare opportunity for us to be able to provide the Australian public with a glimpse into the science that affects all our lives.”

CSIRO manages a high-containment facility so advanced that there are only a few others similar in the world, designed to allow scientific research into some of the most dangerous infectious agents. CSIRO scientists have also been integral in researching the pathogenicity, or disease-causing ability, of different Ebola virus strains.

As most viruses are transmitted from animals to humans, CSIRO scientists are also studying mosquitoes and other insects that carry and transmit disease-causing viruses. This will help improve our knowledge of the viruses they carry, how they develop immunity against them, and how to best prevent or manage these animal and human health threats.

Vivid Sydney is a 23-day festival of light, music and ideas, to be held this year from 25 May–16 June. CSIRO is participating with the light display as well a range of Vivid Ideas events, including:

For more information on the festival, visit www.vividsydney.com.