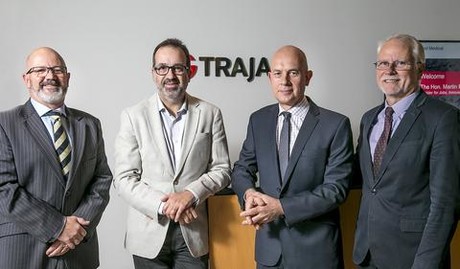 Victorian Minister for Jobs, Innovation and Trade Martin Pakula last week visited the headquarters of Trajan Scientific and Medical in Ringwood, Melbourne, to announce a grant supporting both the company and advanced scientific manufacturing in Victoria.

Trajan is a homegrown developer and manufacturer of scientific and medical devices including the hemaPEN, which sets out to revolutionise blood testing by using a small pinprick to collect a single drop of blood. Founded in Melbourne in 2011, the company has operations in Australia, America, Europe and Asia, employing around 430 people globally.

With the support of the Victorian Government, Trajan plans to invest $2.4 million in the expansion of its Melbourne facility over the next three years, in order to meet growing global demand for its scientific products and technologies. Production will be scaled up through investment in sophisticated automation, manufacturing equipment, upskilling staff, and creation of new roles.

“We are pleased to engage the support of the Victorian Government, highlighting growth areas where Trajan is developing new devices and technologies to improve measurements for health care, food and environmental analysis,” said Trajan CEO Stephen Tomisich.

“Through continued investment into our team and infrastructure, the advanced manufacturing capability of our Melbourne facility is becoming a global benchmark for precision scientific technologies.”

Pakula said the government was “proud to be supporting local innovation”, noting that “Trajan’s choice to further develop its global HQ in Melbourne and expand its local manufacturing capability will strengthen Victoria’s global reputation as a thriving hub for biotechnology and pharmaceuticals”.

Member for Ringwood Dustin Halse added, “We’re getting on with creating jobs in the medical technology sector, which is great news for local workers and even better news for the health and wellbeing of all Victorians.”