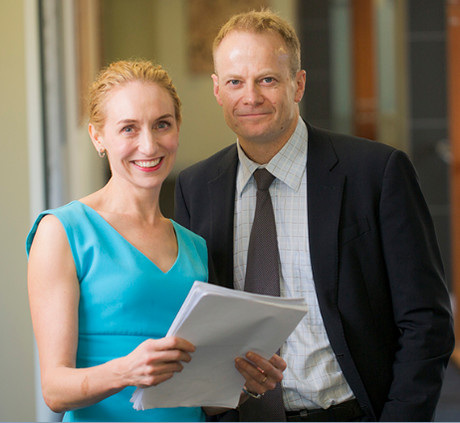 Professors Georgina Long and Richard Scolyer — Co-Medical Directors of Melanoma Institute Australia — have won the GSK Award for Research Excellence 2018 for their groundbreaking research efforts, which have tripled the life expectancy for some advanced melanoma patients and transformed how the cancer is diagnosed and managed worldwide.

Australia has one of the highest incidence rates of melanoma in the world, with an estimated 14,000 cases diagnosed every year. While most people with melanoma can be successfully treated through surgery if it is detected early, over 1905 Australians die from the cancer each year.

According to the researchers, advancing novel treatments like targeted therapies (which modify the actions of specific genes to stop the growth and spread of cancer) and immunotherapies (which use the body’s immune system to fight cancer) could mean no deaths from melanoma within a generation. The delivery of individualised immunotherapy according to response has the potential to improve survival in both early- and advanced-stage melanoma patients and could essentially turn the cancer into a chronic condition.

“Immuno-oncology is the ‘penicillin moment’ for cancer therapy,” said Prof Long. “We’ve discovered how to leverage the relationship melanoma has with the immune system to allow a patient’s immune system to kill the cancer cells. This means we are moving towards melanoma no longer being a possible death sentence, but rather a treatable, chronic condition.

“While we have these remarkable drugs, however, there are still a group of patients who are resistant. We’re starting to understand why patients develop resistance — and if we can tackle this by individualising and targeting therapy, we will impact not only melanoma but all cancers.”

The team at Melanoma Institute Australia are currently focused on how immunotherapies can be ‘personalised’ for melanoma patients. The $80,000 prize that comes with the GSK Award for Research Excellence, presented since 1980 to recognise outstanding achievements in medical research, will support this research.

“As Australians, we’re proud of the success our country has had in leading the fight against melanoma, but there’s more to do and discover,” said Prof Scolyer. “There’s a critical need to better understand why some melanomas develop so we can improve prevention and treatment. We’re working towards making zero deaths from melanoma a reality in our lifetime.”

The award was presented at Research Australia’s Health and Medical Research Awards 2018, held on 8 November in Sydney. Dr Andrew Weekes, Medical Director of GSK Australia, said the company is proud to be able to continue supporting Australian researchers with this award.

“The work of Professors Long and Scolyer is an outstanding example of how home-grown innovation and collaboration can impact the lives of patients around the world. We are honoured to recognise their achievements and support research which could underpin further discoveries and better outcomes for patients,” said Dr Weekes.

The researchers said winning the award is testament to the power of collaboration and highlights the importance of recognising the success of Australian research.

“For us, this award recognises not only our team, but the collaborative efforts of our predecessors, colleagues, industry and patients,” said Prof Long. “We stand on the shoulders of others’ foresight and hard work, as well as the generosity of Australian patients whose participation in clinical trials is critical to scientific discovery.”

“It’s important that Australian science and research success is celebrated, and we are grateful to be a part of that story,” added Prof Scolyer. “We are honoured and humbled to have received this award as we, and our team, work hard to impact the lives of patients all over the world.”