16 months on: the RV Investigator

In 2009, the Australian Government committed $120 million to the purchase of a new research vessel - dubbed the RV Investigator - for the Marine National Facility. On 31 January 2012, construction on the vessel began in Singapore. To coincide with World Oceans Day on 8 June, a time-lapse video showing its progress so far has been released.

For the past 16 months, the vessel has been built by Teekay Holdings Australia, which partnered with Singapore’s Sembawang Shipyard due to its track record and strong commitment to new technologies and innovation. The vessel will dock in Hobart in November to complete a nine-week fit-out of $5 million worth of ICT equipment. Following this, and a short testing period, it will officially replace Australia’s current research vessel, the Southern Surveyor. 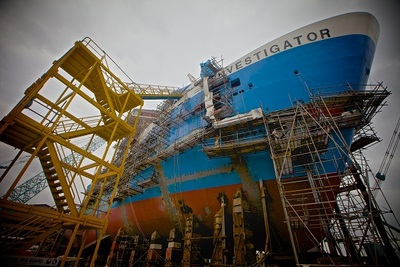 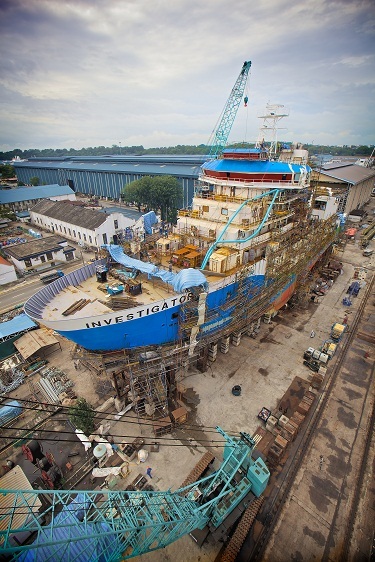 The Southern Surveyor has been the Marine National Facility’s sole research vessel for over 40 years. The Investigator will be a major upgrade - it is bigger (93.9 m), can carry more scientists (40), can travel further (10,000 nautical miles) and stay out at sea longer (60 days).

Sea time onboard the Marine National Facility research vessel is available to all Australian scientists. The Executive Director for CSIRO’s Future Research Vessel Project, Toni Moate, noted that the Investigator will support scientists across a range of disciplines - oceanographic, climate, geological, fisheries and ecosystem research.

“As much as possible, Investigator must be all things to all Australian marine scientists, as Australia has only one blue-water research vessel and this diverse and complex approach to marine and atmospheric science is unique to ocean research globally,” Moate said.

The vessel’s design will feature a backbone of permanently fitted systems for sampling, data acquisition, management and communication including winches, acoustic mapping and environmental monitoring instruments. Research teams will also be able to add purpose-built systems to support their own investigations, such as radiation and trace metal laboratories, deep-water dredging, coring and drilling devices, fishing nets, towed camera systems and remotely operated vehicles.

Time lapse footage of the vessel’s construction can be viewed below.

You can read our initial report on the Investigator at http://www.labonline.com.au/articles/51677-Marine-research-vessel-sailing-into-new-waters.

Russell Urquhart looks at how the European Standard EN 14470-1 compares to those governing...

The University of Wollongong has announced its plans for an $80 million Centre of Molecular and...