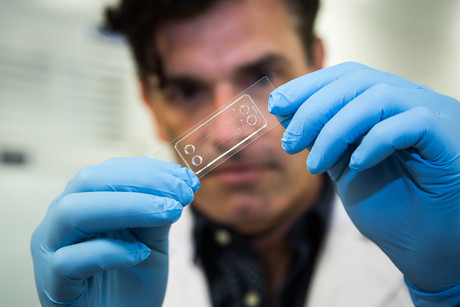 Dr Warwick Nesbitt is on a mission to bring blood analysis out of the pathology lab, developing a family of lab-on-a-chip devices in an effort to improve blood handling, diagnostics and even drug development.

A biochemist based at RMIT University and the Australian Centre for Blood Diseases, Monash University, Dr Nesbitt has a particular interest in platelet biology — platelets of course being the blood cells that stop us from bleeding. Looking for ways to model how blood flows and how this affects platelet function in disease, he turned to microfluidics. Now, he’s won a grant from the National Health and Medical Research Council (NHMRC) to develop his own device to measure platelet function.

“The device that we’re trying to develop is really designed to measure how platelets from patient blood samples behave, and then use that information to either predict bleeding or clotting risks,” he said. This will be particularly useful for patients suffering from von Willebrand disease, which is the most prevalent heritable bleeding disorder.

“So we’re trying to develop a microfluidic lab-on-chip device that does that better, and can potentially be used at the point of care as well. So it doesn’t require a lot of operator expertise or a large pathology lab to do the testing.”

The device in question contains tiny channels, pumps, valves and processors, enabling precise and flexible manipulation of fluids. It is also fast, portable and able to handle very small volumes of blood — which, according to Dr Nesbitt, is not as easy as it sounds.

“Blood’s designed to clot when you take it out of the body — that’s what it wants to do — so developing or engineering systems that can handle blood without that happening is really a big focus, particularly developing the blood-pumps-on-chip,” he said.

With the device for von Willebrand disease now at the prototype stage, Dr Nesbitt and his team are looking at adapting the technology for people who might be prone to thrombosis, heart attack or stroke as a result of clotting.

The technology could even be used to monitor patients on antiplatelet therapy, with Dr Nesbitt noting that a lot of people are resistant to antiplatelet drugs such as aspirin and clopidogrel.

“These patients receive the standard dosing, and then their platelets don’t respond, so they’re still in danger of clotting,” he said. “We’re hoping that our device will enable clinicians to monitor how effective their drug treatment is, and they can tailor the dose or change the drugs that they’re giving the patients.”

It’s an ambitious series of projects which has required a big collaborative team, including researchers at Monash University; microtechnology experts within the MicroNano Research Facility (MNRF) headed by Distinguished Professor Arnan Mitchell at RMIT University; researchers with the Department of Mechanical Engineering at the University of Melbourne; and clinicians at Alfred Hospital’s Department of Clinical Haematology, headed by Professor Harshal Nandurkar. This multidisciplinary approach has allowed the collaborative team to cover all aspects of required research — from device technology, to drug development, to basic biology and clinical translation.

Now, with various projects all at various stages of completion, the researchers are currently focused on increasing the system’s level of automation. This will be useful across multiple applications, enabling the device to deal with a larger numbers of samples and increasing the rate at which the user can screen those samples.

“If we want to use the system, for example, to discover new anticlotting therapies, we need a system that can analyse very large numbers of blood samples, and is also able to assess how potentially hundreds of different chemical compounds affect platelet function, to screen out and identify target molecules that might be better than current antiplatelet therapies,” Dr Nesbitt said.

“So the main thrust at the moment is getting that automation — how you pump blood through the system, developing little paths-on-chip to pump the blood to the different assays, and how you kind of shunt really small-volume blood samples around on that lab-on-chip system.”