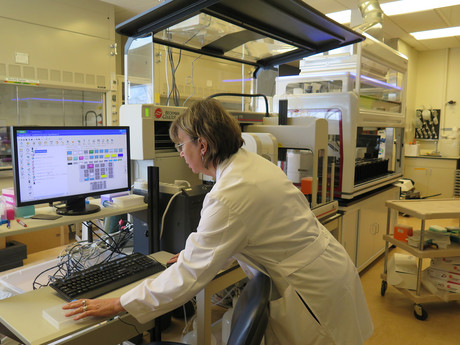 “The area of high-throughput library screening reached a plateau, where the fastest screens took about eight seconds per target,” said Graham Cooks, the Henry B. Hass Distinguished Professor of Analytical Chemistry at Purdue University, who led the research.

“If you can reduce that time by a factor of 10, which is what we’re reporting, then you can potentially do library screens that might have taken months in days,” said Cooks.

“Current estimates suggest that there are more than 1060 drug-like molecules of pharmaceutical interest and over 107 possible reaction conditions for a single metal-catalysed reaction used to build a drug scaffold. This reality underscores the need for rapid reaction screening and optimisation, particularly with the introduction of automated synthesis techniques and the use of combinatorial methods to generate large numbers of closely related compounds,” the researchers wrote in a paper published in The Royal Society of Chemistry’s journal Chemical Science.

DESI, which was originally developed for biological tissue imaging, sprays electrically charged droplets at a sample, from which ions are generated and then collected and analysed in a standard mass spectrometer. The technique was developed by Professor Zoltan Takáts and others in 2004 in Cook’s lab.

“We are spraying a solvent onto a mixture and creating a new product, which we’re seeing in a splashed droplet,” Cooks said.

This technique allows researchers to perform a reaction and analyse the product in one step, in one second. That’s the power of it, Cooks said.

The research was supported by the Defense Advanced Research Project Agency’s Make-It! program, which aims to develop technology to create any particular chemical from cheap raw materials. Five research institutions are involved in the program, and Purdue’s task is to develop methods to rapidly analyse the results of reagents being mixed together under particular conditions.

The project’s objective is essentially to rationalise organic synthesis.

“How do you do that? You have to create some accessible knowledge base, which says that if you combine sample A with sample B you will get sample C,” said Cooks. There’s an algorithmic knowledge base that needs to be constructed, and then there’s the conditions under which particular reagents are examined. So it’s not only the reagents, it’s also the solvents, the catalysts, the physical conditions that we’re looking at.”

The current methods for designing and producing new synthetic molecules can take years between initial design and final production. Increasing the rate of discovery and production of molecules could lead to advances in several areas crucial to national security, according to DARPA.

Liquid Handling 4.0: what to consider when selecting OEM robotic components

Here are some important questions to ask when selecting OEM components and robotic platforms for...

Safety signage is an effective way to regularly remind all employees, contractors and visitors of...