The accuracy and function of the high-performance dosing systems from Brand are based on the sophisticated technology of the seripettor bottle-top dispenser. Brand dosing systems with 2 mL dosing units can dispense even minute volumes accurately. The process reliability is improved by miniaturised MICROmote photoelectric sensors from Balluff.

Due to the need to dispense ever smaller volumes, accurate dosing of aqueous media is a growing challenge in the day-to-day work of a lab. Automated dosing systems are also being subjected to ever greater requirements for accuracy and process reliability. That requires not only more intricate system components, such as dosing units with small volumes, but also sensors designed for the smallest of installation spaces.

“For our 2 mL seripettor dosing unit, we typically specify an accuracy of ±1%, or 0.5 µL, for a target volume of 50 µL of an aqueous, low-viscosity medium,” said Eberhard Albrecht, head of Production Technology and Special Purpose Machine Manufacturing at Brand, Germany. He added, however, that this information pertains to standard values. Based on dosing tests with the original medium, even smaller tolerances can frequently be attained for a specific application.

Seripettor bottle-top dispensers from Brand’s line of liquid handling products have been in use for years around the world. They enable easy and accurate dosing of media directly from the supply bottle. An upward movement of the piston fills the dosing unit with liquid, which is dispensed through the dosing cannula by a valve system during a subsequent downward movement of the piston.

“The piston-cylinder principle used here can also be excellently adapted for use in automatic precision dosing systems,” Albrecht said. “For many years now, we have been building dosing systems for our own production tasks based on this concept.”

The piston stroke systems were first used as the centrepieces of dosing systems with nominal volumes of 10 and 25 mL. But when using small dosing units for dispensing smaller volumes, “the previously used capacitive sensors proved to be unsuitable for reliably detecting unwanted accumulations of air in the cylinder of the dosing unit”, Albrecht explained. “Therefore, we needed a new sensor solution.”

While researching on the internet, he came across miniaturised photoelectric sensors from Balluff, which impressed him with their small designs and convinced him with their technical characteristics.

The MICROmote photoelectric sensor heads, with dimensions of just a few millimetres, have a rugged metal housing and are operated via separate amplifiers. This makes them suitable for small installation spaces like those in the dosing modules of Brand dosing systems, in which, depending on the design, a different number of dosing units are positioned next to one another in a row. The amplifiers, with convenient indicators and operating elements, are housed outside of the system in the control cabinet. Highly flexible electrical cables provide reliable transmission of the signals between the sensor head and the amplifier. 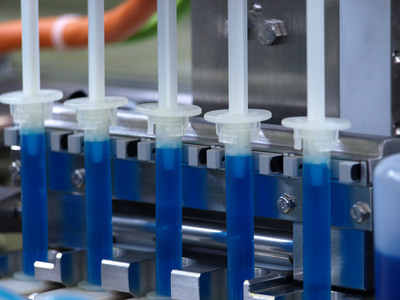 In the centre of the pistons of the small 2 mL dosing units, there is a pin-shaped displacer element; the liquid has to be detected as it goes around this. The emitter and receiver units of the MICROmote through-beam sensors are optimally positioned in the specially designed, fork-shaped housing.

The sensors owe their small size to a patented technology developed in-house for manufacturing micro-optical components, such as LEDs, photodiodes, phototransistors and laser diode units. They are used in many different products with a wide variety of designs; in the case of the Brand dosing systems, the sensors are used as through-beam sensors with modified designs.

“Reliable water detection, which tends to be problematic with other technologies, is … critical for us,” Albrecht said. For this application, the MICROmote sensors use a wavelength in the infrared range at approximately 1480 nm, where water has its maximum absorption. At this wavelength the optical sensors also work reliably for clear water, even if the cylinders filled with liquid are made of semi-transparent material. This simplifies the detection of liquids with high water content. Unwanted accumulations of air in the dosing cylinder, which can lead to inaccuracies in the dispensing volume, are then detected by the absence of liquid. Sensors on the cylinders of the dosing units are located in a fork-shaped housing designed for the special installation.

The company also uses the through-beam sensors in the area of level expansion tanks, which serve simultaneously as a component of the dosing modules for constant system pressure and as an air trap. This is where the minimum and maximum levels are detected. The main container is monitored in the same way. To do so, the tiny emitter and receiver modules are located on the intake tube. If no liquid is detected in the tube, the system is empty. 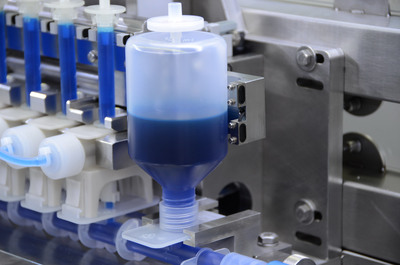 Tiny MICROmote through-beam sensors monitor the minimum and maximum levels in the level expansion tank of the dosing modules.

The MICROmote photoelectric sensors are therefore a suitable solution for applications utilising high-performance dosing systems from Brand. They ensure detection of aqueous media and make a substantial contribution to the compact design in the area of the dosing modules. This makes it considerably easier for the user to exchange individual modules while operation is in progress.

Top image caption: The modular dosing systems from Brand are based on the seripettor dosing systems. There is no space left for conventional sensors in the closely aligned dosing modules.

CELLINK has launched the C.WASH — an innovative liquid handling system for media change in...