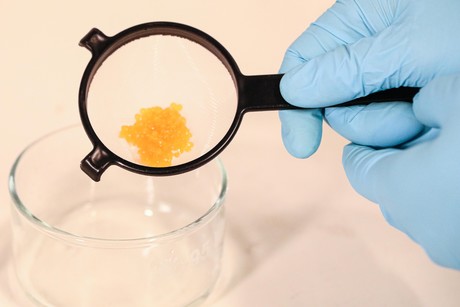 Swiss scientists are developing energy-efficient processes for removing contaminants such as hexavalent chromium from water, with a little help from sponge-like crystals known as metal–organic frameworks (MOFs). Their work has been published in the Journal of Materials Chemistry A.

Hexavalent chromium contaminates water sources around the world, with one US company fined in February 2020 for having put employees at risk. It is considered to be extremely toxic, especially when inhaled or ingested, and its use is regulated in Europe and in many countries around the world. It is thought to be genotoxic, leading to DNA damage and the formation of cancerous tumours.

Now chemists from Ecole polytechnique fédérale de Lausanne (EPFL) are tailoring MOFs that can collect specific substances from solution. The materials are known to be extremely porous, with the contact surface area contained in 1 gram of MOFs as large as that of a football field. The target substance enters these pores and sticks to the internal surface area in a process called adsorption.

The EPFL scientists have previously shown that their materials can efficiently adsorb other substances dissolved in solution, like gold, mercury and lead. For instance, 1 gram of MOF yields almost 1 gram of gold. Now the scientists have demonstrated the extraction of hexavalent chromium from water.

“The great thing about our sponges is they are relatively easy and cheap to make,” said lead author Wendy Queen, from EPFL’s Laboratory of Functional Materials. The scientists expect 1 kilogram of MOFs to cost roughly 15 CHF ($24) to make, whereas 1 kilogram of gold is worth roughly 55,000 CHF ($86,400).

“The next step is to test our sponges at larger scales.”

Why do some water droplets 'bounce' off the walls?

Scientists can now explain why some water droplets bounce like a beach ball off surfaces, without...