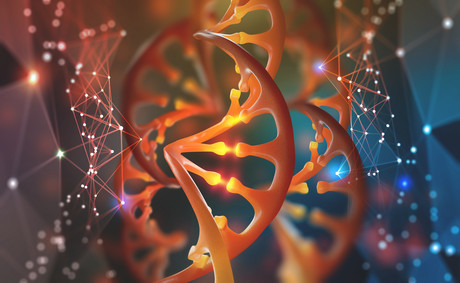 scATAC-seq technology provides unprecedented opportunity to study the impact of epigenetic changes on development and disease.

Our genetic sequence is generally the same in all cells in our body. However, throughout our lifetime, epigenetic modifications can change the way genes are expressed, without altering the gene itself, affecting how a single cell or small groups of cells (cell types) function. Due to their significant effects on cellular function and their dynamic nature, epigenetic changes play critical roles in development and disease.

Mapping the epigenome greatly facilitates our understanding of the epigenetic mechanisms underlying cellular differentiation and disease. The epigenome includes multiple types of modifications that can be different in each cell and can change over time, such as methylation, histone modifications, nucleosome positioning, higher order chromatin structure, nuclear location and proximity to other co-regulated regions of the genome. Until recently, the tools to study these complex, dynamic epigenetic changes consisted largely of bulk assays and assays that focused on specific fragments of DNA. Now technological advances, centred around the single-cell assay for transposase accessible chromatin (scATAC-seq), have allowed scientists to map the epigenome at the level of a single cell across entire tissues and organs. Using this technology, researchers are discovering new cell types and gaining insight into how different cell types work together to form functioning organs. This article will explore how epigenetic changes work and how scATAC-seq is poised to transform how they are studied.

A cell’s entire genome, containing both coding and non-coding DNA, is stored carefully within its nucleus. Inactive regions of the genome are packed tightly away, wrapped around proteins called nucleosomes in the form of chromatin that is inaccessible to proteins that transcribe DNA. On the other hand, biologically active regions can be modified to transition from closed to open chromatin that is accessible to transcription machinery. Epigenetics add a layer of regulation to this process, controlling how genes are expressed by changing DNA accessibility. Epigenetic mechanisms, such as chromatin remodelling, DNA methylation and nucleosome positioning, can make DNA more or less accessible.

Sometimes, epigenetic factors can ramp up a gene’s expression so that a cell is producing many times more of the gene product as neighbouring cells are. Other times, epigenetic modifications can block transcriptional machinery, decreasing how much the gene is expressed. The full gambit of epigenetic modifications present in a cell together fine-tune how much of each gene gets transcribed into RNA, and subsequently how much of an RNA transcript gets translated into the protein or goes on to perform a structural or enzymatic function within the cell itself.

So, what is scATAC-seq and how does it help scientists map the epigenome? scATAC-seq is a single-cell adaptation of a parent method, the ATAC-seq.

There are enormous cell-to-cell epigenetic differences that evolve over time. Single-cell tools enable us to study this heterogeneity and understand how cell populations are different and how they fit into an entire organism. scATAC-seq technology is ideally suited to address this challenge as it is designed to allow researchers to study vast cell populations simultaneously. scATAC-seq is helping researchers achieve the goal of creating a ‘cell atlas’ that maps out all the features that define different cell types throughout development and catalogues pathogenic epigenetic modifications associated with specific diseases.

ATAC-seq is a method to survey the epigenetic landscape of hundreds to thousands of cells. Jason Buenrostro and colleagues at Stanford University pioneered the work behind ATAC-seq and published their research in 2013 in Nature Methods. ATAC-seq requires relatively few cells as a starting material compared to other methods of studying epigenetic changes, such as MNase-seq, ChIP-seq and DNase-seq, and can collect the desired information in a single assay in a single day. In ATAC-seq, Tn5, a hyperactive transposase mutant, binds to open regions of the genome, cutting the bound DNA and ligating NGS adapters. After end polishing and PCR, these prepped fragments are sequenced to discern those regions of the chromatin that were open. Thus ATAC-seq can give information about the average epigenetic state of the population of cells in a sample, and map where in the genome nucleosomes are positioned and transcription factors can bind.

While ATAC-seq is very useful, it still does not give information at the single-cell level, which is essential to create an epigenetic cell atlas. Working out of Harvard, Buenrostro used microfluidic chip technology to segregate individual cells before employing ATAC-seq, creating scATAC-seq. The technique, published in the journal Nature in 2015, uses a microfluidic platform to isolate hundreds of individual cell nuclei, after which the Tn5 transposase tags open chromatin regions with sequencing adapters. The open chromatin library is then amplified with cell-identifying barcoded primers. Once amplified, libraries each representing different cells are pooled and sequenced to reveal open regions in the genomes of individual cells. One scATAC-seq experiment can generate profiles of open chromatin regions for thousands of cells, offering a snapshot of epigenetic similarities and differences. This single-cell approach provides classification of different cell types within a sample, for example, a cell type’s relative frequency within a tissue, and also identifies distinct epigenomic changes that occur within a given cell type.

Classic scATAC-seq has given researchers across numerous disciplines key insights into the etiology of some of the most complex and far-reaching human diseases including various cancers, autoimmune disorders and neurological disorders like Huntington’s, Alzheimer’s, Parkinson’s and schizophrenia. However, the assay was originally designed to sample hundreds to thousands of cells per experiment. More recently, the scATAC-seq method has been further refined into methods that can process even more cells in a single experiment. Ron Lebofsky at Bio-Rad Laboratories and Caleb Lareau at Harvard University collaborated with Buenrostro to further scale up scATAC-seq using Bio-Rad’s droplet-based technology to partition cells (Figure 1). 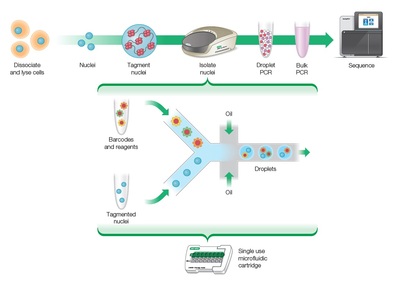 First, they developed a droplet-based version of scATAC-seq (dscATAC-seq) that harnesses the power of the ddSEQ Single-Cell Isolator and Bio-Rad’s Droplet Digital technology to partition thousands of nuclei or whole cells into individual nanolitre-sized droplets to facilitate library preparation for ATAC sequencing. Use of a droplet-based solution instead of the original microfluidic technology leverages an industry-leading workflow that is scalable, easy to use and saves time. The new workflow also significantly improved library complexity due to a custom hyperactive transposase that cuts the strands between the nucleosomes into very short fragments for greater resolution. Together these improvements enable researchers to gain greater biological insight with less sequencing, more robust detection of cell-to-cell differences, in less time spent in the lab. Researchers have used dscATAC-seq to perform an unbiased study of different cell types and regulatory elements within a mouse brain.

To further augment the capabilities of dscATAC-seq, they added a feature called combinatorial indexing to create single-cell combinatorial indexing for the ATAC-seq (dsciATAC-seq) assay. In this approach, a hyperactive mutant the transposases are loaded with indexed sequencing adapters or a first set of barcodes that are integrated into regions of accessible chromatin. Then, instead of a single cell or nucleus being encapsulated into a single droplet, the requirement for one cell per droplet is no longer needed. Cells can be loaded at much higher density because when droplets have more than one cell, the cells’ ATAC fragments can be distinguished by their initial barcode. This combinatorial indexing approach of barcoding cells in two different ways allowed the researchers to process many more cells at once, generating high-quality chromatin accessibility profiles of as many as 50,000 cells for each sample. In practice, researchers have used dsciATAC-seq to discover how different stimulation conditions affect the chromatin accessibility landscape in immune cell clusters from human bone marrow derive cells, to reveal changes across cell types and upon stimulation conditions at single-cell resolution.

Overall, these methods represent the massive scalability of the scATAC-seq-type methods and their potential ability to create a high-resolution cell atlas of the estimated 37.2 trillion cells that make up the human body. Such an atlas will give researchers an unprecedented look at the human body, allowing them to discover new clues about how biological processes work and apply their insights towards developing better treatments for a range of diseases.

The non-invasive method relies on an algorithm to analyse patient stool samples, which contain...

Researchers developed a simple agglutination assay to detect the presence of antibodies raised in...