Rapid malaria detection with just a drop of blood

Singaporean scientists have invented a technique to detect malaria within minutes from a single drop of blood. The method was developed by the Singapore-MIT Alliance for Research and Technology (SMART) in collaboration with Nanyang Technological University (NTU) and has been published in the journal Nature Medicine.

Malaria affects over 60 million people worldwide and could be fatal in serious cases, but there is no vaccine and antimalarial drugs are losing their efficacy. Furthermore, malaria infection is still detected via stained blood smear microscopy. A lab technician will need to spot the tiny parasitised red blood cells among millions of uninfected red blood cells, especially in the case of early infection, which is like finding a needle in a haystack - and often not conclusive. Other malaria diagnostic techniques, such as polymerase chain reaction (PCR), are not field-deployable and can only provide semi-quantitative analysis.

The SMART solution works by detecting hemozoin crystallites - the metabolic waste product of the haemoglobin consumed by malaria parasites at the onset of the disease. The crystallites are basically oxidised iron nanoparticles (Fe3+), making them more ‘magnetic’ than the healthy red blood cells. The new technique uses a miniaturised magnetic resonance relaxometry (MRR) system, a cousin of magnetic resonance imaging (MRI), making it more sensitive, more accurate and faster than traditional methods. 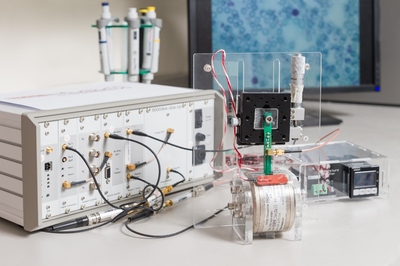 The technique detects malaria infections at a very early stage, even when the amount of parasites in the blood is extremely low. It was successfully proven in mouse studies and the team is currently working on a human study in clinical settings.

“This system is more reliable and allows for rapid screening to be conducted,” said Professor Han Jongyoon, the principal investigator from SMART’s BioSystems and Micromechanics (BioSyM) Interdisciplinary Research Group (IRG). “So, given the flux of people moving in and out of developed nations especially, this system has the potential to help prevent mass import of malaria by infected persons. For developing nations, this system, which does not require refrigeration or other extensive infrastructure, is portable enough to be deployed in rural areas to help rapidly screen for malaria and hence stem the spread of this infectious disease.”

Professor Peter Preiser, SMART Co-Investigator and Chair of NTU’s School of Biological Sciences, said the test has the additional potential to rapidly detect parasites that are resistant to antimalarial drugs, particularly artemisinin, thereby providing a valuable tool in trying to prevent the global spread of these resistant parasites.

“Importantly, rapid and accurate diagnosis will reduce the prescription of drugs to non-infected people - one factor that contributes to why we are seeing more malaria parasites developing resistance to antimalarial drugs,” said Professor Preiser.

SMART Research Scientist Dr Brian Peng Weng Kung, the lead author of the paper, added that the mini MRI system is “much cheaper to produce than the million-dollar MRI machines used by hospitals”.

“We built tiny radiofrequency (RF) coil which is used to apply RF pulses and receive a signal from a drop of blood, and the whole detection process happens in a few minutes,” he said. “Furthermore, since this technique does not rely on immunoassay labelling that requires expensive chemical reagents, we are able to bring down the screening test cost to less than S$0.10 per test.”

SMART is now spinning off a company to commercialise the technology, which could work for other types of blood disorders. The research team is also setting up field-tests in South-East Asia, where they will test if the system can be run on solar power.

Researchers have developed a process for rapidly detecting multidrug-resistant pathogens, where a...

In an effort to select the healthiest embryos resulting from IVF procedures, researchers have...