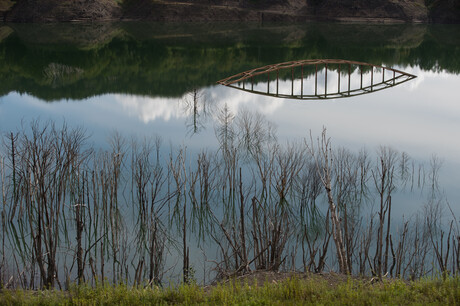 Our evolving society is impacting our environment in many ways that we don’t fully comprehend.

Activities such as urban sprawl, agriculture, aquaculture, commercial fishing and invasive species due to market globalisation are slowly impacting our oceans, lakes and streams. Detecting and monitoring changes in the biological balance in these systems is critical to maintaining them and to potentially setting proper policies to remediate these unwanted changes. Historically, population studies involved directly observing and collecting specimens of the organisms of interest — activities that are laborious, time-consuming and expensive. Over the last decade, scientists have been turning to environmental DNA (eDNA) to simplify the monitoring of these populations.

Environmental DNA is simply DNA that is present in a given ‘environment’ such as an area of soil, air or water. As living things go about their lives, they constantly shed DNA via dead skin cells, secretions, excrements and eventually their death. eDNA specific to a species of interest can be quantified and analysed over time and/or locations for changes in their relative abundance, indicating changes in their physical population. Samples are often collected at multiple locations to create a population map of the region of interest.

Aquatic systems are an ideal medium for these types of studies as eDNA from many organisms in or near the water source tend to be well represented and can easily be detected. This non-invasive approach is gaining the reputation of being more sensitive as, for example, the fisherman’s skill is no longer a variable, and the time and effort expended collecting the sample is reduced.

One of the first applications using eDNA was monitoring for the presence and abundance of invasive species. eDNA is being used to monitor all sorts of unwanted creatures, from the American bullfrog and Burmese python to the Asian carp and zebra mussels. These species are carried into their new habitats via commercial trade routes as hitchhikers in cargo, in ballast water from large vessels, or as exotic pets that have escaped from their owners. Having no natural local predators, they multiply and deplete the resources (flora and fauna) that others in that region depend on for survival. In addition to sometimes being a nuisance, they can dislodge other animals or fish and upset the local balance in the ecosystem. Although sometimes at very low levels, their DNA can be detected in aquatic environments and levels monitored to determine if corrective actions such as the use of electrical barriers or targeted hunts are being successful.

Another interesting application is the monitoring of endangered populations. Here, eDNA is used to set basal levels and then monitored to determine if preventative actions or policies are having positive effects. For example, in China, scientists have developed an eDNA assay to detect Chinese sturgeon, the largest migratory fish that spawns in the Yangtze River. Spawning has declined in recent years, and the species is on the brink of extinction. In cases like these, traditional methods of population estimation that involve seeing or catching the fish are not feasible because the fish is so rare. The group used eDNA testing to identify the presence, number and behaviour of reproductive individuals over time at four sites along the river. The eDNA testing data indicated that sturgeon were still travelling up the river, but their numbers had continued to decline between 2018 and 2019. The results led the authors to recommend conservation measures such as increased eDNA monitoring, restocking the river with adult fish, and restoring the habitat to increase spawning and bring this species back from the brink.

A third application that is gaining momentum, also related to fish, is the monitoring of fish stocks in the oceans of the world. The goal is to monitor the population of commercially valuable fish and set safeguards for long-term sustainability. Traditional methods relied on fisheries declaring their catches and spot monitoring by scientists, but these are not always accurate, and they can be costly and challenging with transient fish. In the North Sea, Belgian researchers have found promising correlations between eDNA samples and traditional trawling captures and have been mapping multiple regions of the sea for three economically important species. Their sampling has spanned multiple years and multiple sites, and their goal is to eventually use eDNA as their monitoring strategy for determining the health of the fish stocks.

How eDNA is analysed

To detect and quantify eDNA, scientists first collect water samples (a few millilitres to a few litres) from each of the sites they are studying. The DNA is concentrated and collected using filters, resins or precipitation methods and is then purified of residual contaminants. RNA is also sometimes collected (COVID-19 in wastewater) although if not protected it tends to degrade quickly. Typically, samples are collected at various time intervals to gain a temporal view of the population density.

From a technical perspective, working with eDNA can be challenging in that the samples are very diluted and thus must be concentrated, and there may be the presence of inhibitory molecules in the sample. The concentration protocols used vary depending on the complexity of the sample and, as such, some only collect a small percentage of the total eDNA present in the original sample. Purifying the sample can also contribute to the loss of eDNA in the sample.

Once purified, PCR is usually the go-to technology. Standard PCR, where a set of primers is used to specifically amplify the target gene of interest, yields presence versus absence results but cannot determine quantity. Next-generation sequencing (NGS) is sometimes used for bulk analysis of large numbers of species at one time, but most applications lack sensitivity and experimental costs can quickly spiral.

Accurate quantitation of eDNA is usually performed using quantitative PCR (qPCR) or droplet digital PCR (ddPCR). Both these techniques are based on using primers to target specific DNA sequences and generally include a fluorescent probe that targets the same DNA product and is degraded during the amplification process. The degradation process releases the fluorophore and allows the amplification process to be monitored. From here the two techniques diverge.

qPCR monitors the exponential amplification process. During the cycling stage, the more molecules of interest present in the sample, the faster the signal reaches a specific amplitude. The lower the number of target molecules present, the higher the number of amplification cycles required to reach the same threshold. These values are normally compared to a dilution series of the same target at known concentrations to call out the value of the unknown sample.

ddPCR differs in that it is a molecular counting technique combined with distribution statistics. What would be a 20 uL qPCR reaction is sub-partitioned into approximately 20,000 droplets and amplified in a thermocycler. Post cycling, droplets with the target of interest will fluoresce whereas those without will not. The positives and negatives are counted, and Poisson distribution analysis is applied to compensate for randomly distributed events with one or more targets of interest. Excluding stochastic effects that are omnipresent in all methods, ddPCR provides the highest levels of accuracy and precision.

Each of these techniques has its advantages and limits. qPCR assays generally cost a little less, have a larger dynamic range (six to eight orders of magnitude) and take less time. They require standard curves and multiple replicates, and they offer approximately twofold precision. ddPCR assays don’t need standards, don’t require replicates, are more tolerant to inhibition, have better inter and intra lab reproducibility, and offer +/-10% precision. They have a smaller dynamic range (1–150,000 molecules of interest per well), cost a little more and take longer to run in the lab. ddPCR assays offer the highest accuracy at low molecule concentrations.

Environmental DNA analysis has been around for quite a while but only began to get attention about a decade ago. As new environmental challenges present themselves, this technology offers the ability to quickly and cost-effectively ramp up surveillance programs to monitor the situation and hopefully set appropriate policy. Many consortiums and government agencies across the globe are recognising the applicability of eDNA to their environmental studies and are sharing best practices, lessons learned and general know-how. These are exciting times for this field as things are changing rapidly. Unfortunately, some will miss out on those sunny workdays spent with a rod and reel.

*Frank Bizouarn is the Market Development Team Manager in Bio-Rad’s Digital Biology Group, where he has worked at the forefront of nucleic acid amplification for 22 years. Currently he is focused on supporting and promoting quantitation, detection and sample discrimination applications that take advantage of the high resolution and sensitivity provided by the power of droplet partitioning.

The DNA test has been shown to identify a range of hard-to-diagnose neurological and...

Crop modification via a bioactive spray

A new crop modification technique relies on a spray that introduces bioactive molecules into...